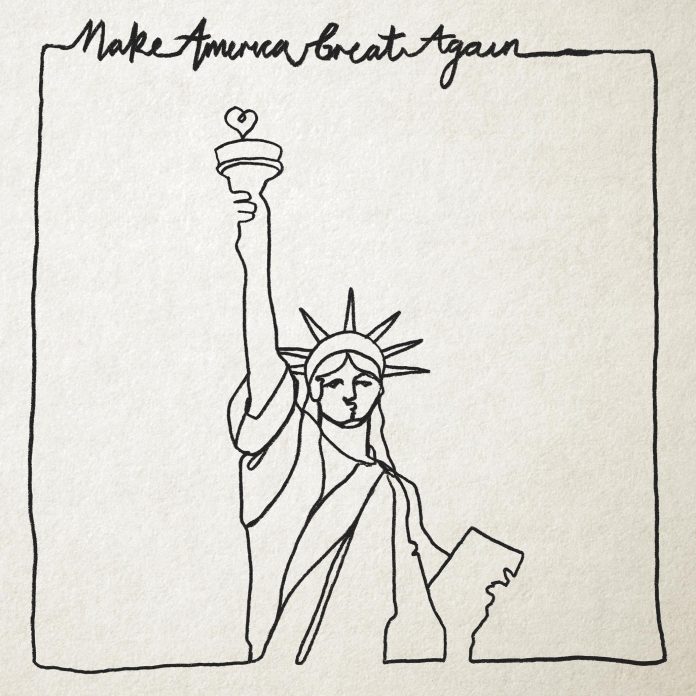 Frank Turner is sharing ‘Make America Great Again’, the latest new track to emerge from his forthcoming album Be More Kind, which was today’s “World Record” on Zane Lowe’s Beats 1 show. Available through Xtra Mile Recordings/Polydor Records, ‘Make America Great Again’ is a wry riposte to the poisonous invective of Trump’s White House, with Turner’s knack for an irrepressible hook bolstered here by the hints of electronic pop which tinge Be More Kind.

‘Make America Great Again’ arrives alongside a new video which Frank recently shot on the streets of Austin, Texas whilst performing at this year’s SXSW Festival, conducting his own vox pop on what Americans feel truly makes their country great – watch here https://frankturner.lnk.to/MAGAVideoPR Speaking about the new track, Frank says: “This is obviously one of the more provocatively-titled songs I’ve released in recent years, but in a way, I’m not kidding. America is bloody great, one of my favourite countries in the world. Much like back at home, they’ve had a politically fraught time of late, and I wanted to say something about it. And for the video, I thought I’d make some new friends (in Texas!) to help out with the suggestions.”

Be More Kind represents a thematic and sonic line in the sand for the 36-year-old. “I wanted to try and get out of my comfort zone and do something different,” says Turner. After the stripped-down, live-sounding previous album Positive Songs…, Turner wanted to try a new approach for the record. With this in mind he recruited producers Austin Jenkins and Joshua Block, formerly of psychedelic-rock Texans White Denim, and Florence And The Machine and Halsey collaborator Charlie Hugall and the idea of recording a more rock-led album with tints of electronic-pop took shape. Be More Kind was made over a period of seven months, giving Turner the opportunity to turn songs on their head, try different versions and shake up the dynamics within his band.

Be More Kind was inspired by a Clive James poem called Leçons Des Ténèbres: “I should have been more kind. It is my fate. To find this out, but find it out too late.” “It devastated me the first time I read it,” he says. “A lot of older, wiser people tend to say things like that, that the things that come out in the wash at the end of a human life are the way you treated the people around you. In the modern world, that’s a lesson that all of us, myself included could do to learn.”

Turner recently announced the Be More Kind World Tour which will begin in April, with its first leg playing to over 200,000 people across the UK, the USA, Europe, Canada, Australia and New Zealand, taking them through to Christmas. The first batch of announcements covers 120 dates.

15th Dublin The Academy SOLD OUT

20th Aberdeen The Garage SOLD OUT