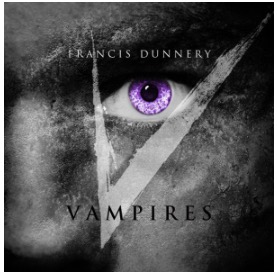 My journey with It Bites stretches back to November 1985 when I first saw the band as a support act in Birmingham and about 30 seconds into the anthemic ‘All In Red’ I was well and truly hooked…..I’ve seen the band in both forms so many times since there really should have been a restraining order set against me.
This ‘Vampires’ album from Mr Dunnery has been a long time coming….we found out about it on Francis’s last UK tour back in October 2014….but it was finally released on 29th February 2016….and we couldn’t be happier.
The album is a chance to hear reworking’s of It Bites classics such as ‘Yellow Christian’ ‘Screaming On The Beaches’ ‘Old Man & The Angel’ ‘Calling All The Heroes’….the heart wrenching ‘Ice Melts Into Water’ and fan favourite B side ‘Vampires’ plus many more….all in all its a fantastic album (not been off the car stereo all week) but doesn’t detract from the original versions…..it just gives you an opportunity to hear them as Francis sees them nowadays with the other members of The Sensational Francis Dunnery Band, let’s face it we all look at stuff a little differently to how we did back in 1986.
My personal highlight is the version of ‘Once Around The World’…..the 1988 album of the same name still remains to this day my favourite album of all time…..the track takes you on a 15 minute journey each time you listen to it and still gives me goosebumps each time I hear the opening bars, but it is a masterpiece of songwriting (any song with the line ‘Willie Carson done for arson for burning up the track’ deserves the Ivor Novello IMHO) which sadly passed so many by first time around……more fool them I say.
Other gems on the album such as ‘Rose Marie’ ‘Still Too Young To Remember’ & ‘Underneath Your Pillow’ make you wonder how this band weren’t massive when lesser bands hit greater heights with a lot less talent (I did receive a proper insight into this last time I interviewed Francis….but that’s a story for another day) but those of us in the know just bask in the glory that we have been listening and relishing these tunes for over thirty years….and these new versions still beautifully alongside the originals.
To sum up….this new ‘Vampires’ album is a perfect addition to any collection….the It Bites fans amongst will have already put our orders in….and I advise the rest of you to go to Francis Dunnery’s website and grab a copy…..then go to your local record store and purchase the rest of the It Bites back catalogue…..I’m not on commission but my word you will thank me for pushing you in the right direction.
Garry Foster
Unchained Tuesday’s 10pm-Midnight
Prog Rock Files Thursday’s 10pm-Midnight
101.8WCR FM & wcrfm.com