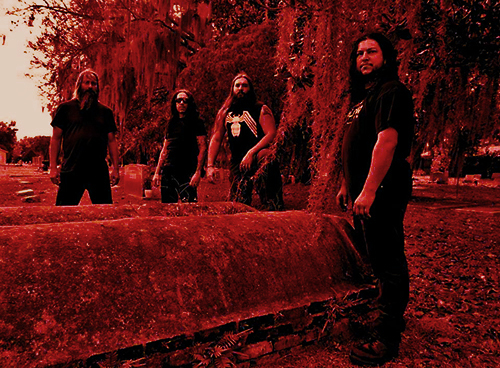 Florida extreme metallers in line to win for second time

Extreme Metal band FORESHADOW have once again been nominated in the METAL GROUP OF THE YEAR category for this years IMEA Awards. Since it’s foundation the IMEA Awards’ mission is to honor and recognize international individuals and organizations in the music, theatre and film industries. Emanating from Tampa, Florida (U.S.) FORESHADOW have been blending the key elements of Death Metal, Black Metal and Old School Thrash Metal to establish their own distinctive sound since early 2008.

Online voting is underway now and will continue till October 7th, 2015 at 11:59PM EST. Foreshadow are listed in category 29 (Metal Group of the Year). Votes can be cast at the following link: www.imeaawards.com/vote/music

FORESHADOW had this to say about the nomination:

“We are excited to be nominated again for the “Metal Group of the Year” award. We thank everyone on the IMEA Awards committee for their selecting Foreshadow as a nominee.”

The 3rd annual IMEA AWARDS will take place this October 24th at the Marietta Performing Arts Center in Marietta, Georgia. For those wanting to attend the event tickets can be purchased on the IMEA AWARDS Website.