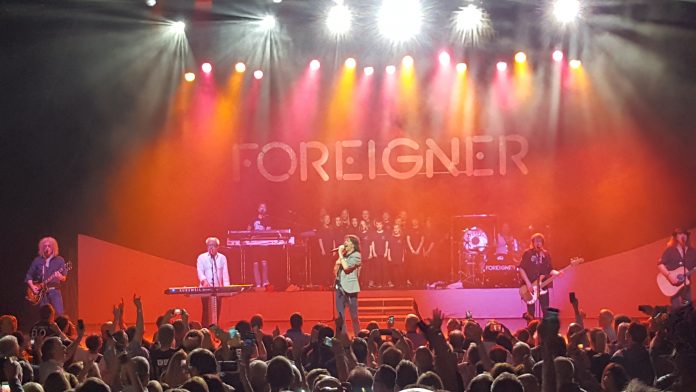 Editors note: Two of MV’s reviewers were both at the same gig last night. They both decided to spend their hard-earned money on Foreigner, so here – in what I think might be an MV first – are two reviews of the same gig.

Starting with Keith’s thoughts on the evening (he’s right too, I do hate Marmite, my thoughts on Foreigner are my business….)

Three things where there is apparently no middle ground where you’re allowed to say that they’re OK. You either love them or hate them.

To many, Foreigner stand for the worse parts of the 70’s & 80‘s rock scene, producing endless lightweight radio friendly songs (with by and large easily memorable lyrics) that you can put your hands in the air to and sing along to. And that’s the same reasons that so many love them.  Foreigner4 dominated the airwaves, sold by the trillions, made the band a fortune and was inevitably the catalyst for the fall out between the founders’ guitarist Mick Jones and singer Lou Gramm.  Kelly Hansen joined in 2005 and took over vocal duties, since when the band have been regular visitors to these shores, most recently sandwiched in the middle of Styx and Journey as part of the triumvirate tour which by common acceptance they won hands down, and then more recently with Europe in support at the Wolves Civic.

This tour comes on the back of the release of the album (of hits) recorded with the 21st Century Orchestra and Choir; words which fill me with dread no matter which band it is. Do rock bands hook up with orchestras in order to try and give themselves some credibility with the elder generation outside of the rock scene or because they feel that it’s a cool thing to do? Either way, the fact that tonight we’re at The Symphony Hall rather than the NEC or NIA hints that they might have an orchestra in tow, unlike other arena gigs on the tour.

However, first up is John Parr’s acoustic set of five songs. He explains right at the start that in ’84 he signed to the same label as Foreigner and Mick Jones asked him to be special guest on the next tour – it’s finally happened. There’s a stunning version of Fleetwood Mac’s ‘Oh Well’ and a story that explains that he helped write Gillette’s theme tune to the ‘Best A Man Can Get’ razor adverts (how bizarre) before ending with his major hit ‘St Elmo’s Fire’. If you don’t know the true story behind ‘Man in Motion’ then check it out; it’s amazing.

He’s followed by Joanne Shaw Taylor who headlined here a few short months ago and must be hoping to reach out to a new audience on this tour. An equally short six song set with her band covers her more accessible songs across her albums including ‘Nothing To Lose’ ‘Diamonds In The Dirt’ and ‘Going Home’. The band are tight and in fine form having just come off the tour and Bob Fridzema on Hammond organ and keyboards seems to be the final piece in the jigsaw. There’s no honey & lemon tonight as her voice in fine form but JST seems an odd choice as support beyond this her home town gig but as she has recently signed with Sony Worldwide it might be that this is to be part of the push to put her on a bigger global stage. Time will tell.

The revealing of a plain simple set means much to my relief there’s no orchestra and this concert will focus on the songs. Those that have seen Foreigner before know that after his heart attack and fitting of a pacemaker Mick Jones doesn’t appear for the first three songs and tonight the band kick into ‘Double Vision’ ‘Head Games’ and then ‘Cold As Ice’ during which Kelly Hansen climbs across the back of the chairs into the middle of the auditorium to get the fans standing. It therefore seems a shame that having done so they then play ‘Waiting For A Girl Like You’ during which everyone sits down again!

Kelly has to ask a fan in the front row to tie his shoe laces up and he milks it for what it’s worth but the warmth and humour are to the fore. The hits keep coming before we head into long protracted band member introductions which drag on until Kelly finally introduces the sole remaining founding member; that’s Mick Jones. And at this point you’ve got to bring up the elephant in the room question. Now that we finally (six songs in) have an original member on stage, have we been watching a tribute band? Or have we been watching Foreigner?

‘Feels Like The First Time’ is followed by ‘Urgent’ which is just that. The honking Sax solo in the middle is as good as any out there either by Clarence Clemmons for Springsteen or the one in Baker Street.  And then. Oh dear, and then.  We have a keyboard solo, notable solely for a bass note so deep your ribs vibrate, a keyboard/drum duet and finally a drum solo by the end of which I want to slit my wrists. We’ve drifted back to the late 70’s and these should be banned once and for all.

‘Juke Box Hero’ picks up the pace again and brings the first part of the show to a close. Encores of ‘Long Way From Home’ (one of the very first Foreigner songs) and THAT song before the stomp of ‘Hot Blooded’ brings the show to a close.  Mick Jones has been on stage for just six songs – half the set; anybody feel short changed? I suspect not.  Kelly Hansen has a fabulous set of pipes, is a great frontman and is without a shadow of a doubt the star of the show.   I’d bet that 90% of the fans there tonight went home very happy. The songs are embedded in AOR conscious and have stood the test of time. Mick has gathered around him a very talented set of musicians who do justice to the heritage of the band although how much longer Foreigner continue must be open to some debate.  There are some tickets left for the remaining shows. If you want to go out for the night and sing these classics then you’re unlikely to come away disappointed.

THAT song?  ‘I Want To Know What Love Is’ of course.

MVM head honcho Andy hates Foreigner. I bet he doesn’t like Marmite either! 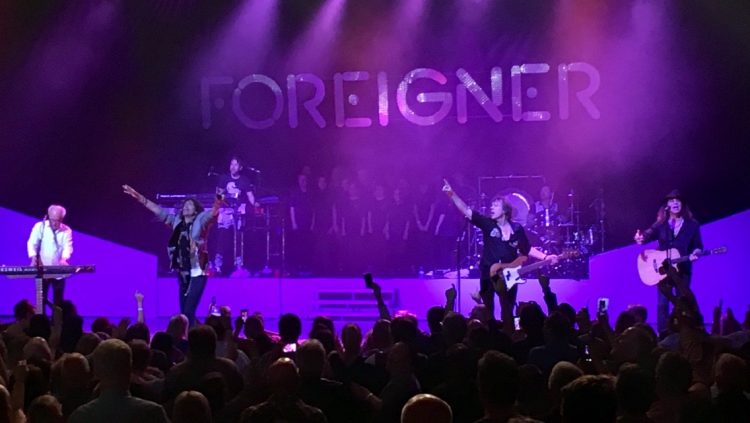 A real ‘hot blooded’ night in one of the UK’s finest venues watching one the best bands of the last 40 years and you have all the ingredients for a superb night of entertainment ahead.

Foreigner are one of those bands that I just refuse to miss each time they hit the UK, you know you are going to get a note perfect trip through their back catalogue, yes all the rock cliche traits are on show but this is no ‘topping up the pension’ band…..they are at the very top of their game and love being up there on stage in front of a sell out crowd.

The setlist is exactly what you would put on a compilation CD for the car…..all the hits and album tracks are here and sounding as good if not better than ever….’Cold As Ice’, ‘Double Vision’, ‘Dirty White Boy’, ‘Waiting For A Girl…’ are all lapped up by a noisy and very appreciative audience which Kelly Hansen joins for an impromptu ‘walkabout’ across the seats in the middle of the auditorium.

It’s during the band intro’s that Kelly Hansen (IMHO the best voice in rock) turns the evening up to ‘eleven’ when he brings on founder member Mick Jones for the rest of the show…..Mr Jones has had health issues in the last few years but still feels up to playing for an hour a night with his band, and at 70 years of age he seems to have found the perfect balance.

Jones launches into Foreigner’s first hit ‘Feels Like The First Time’ which produces a mass sing along from the Midlands crowd, there were obviously some ‘First Timers’ in the crowd as they didn’t recognise the long intro to ‘Urgent’ and saw an opportunity to nip out to use the facilities……serious schoolboy/girl error, ‘Urgent’ is one of the greatest rock tracks of the last 40 years and the live version with Tom Gimbel’s incredible sax playing is a joy to behold.

A lengthy version of ‘Juke Box Hero’ including keyboard & drum solo closed the main set to rapturous applause before the band returned to the stage for ‘Long, Long Way From Home’ and without doubt one the finest rock ballads of all time in

‘I Want To Know What Love Is’ which is started by the band getting the audience to feel the groove and feel the love, Kelly Hansen was in full flow.

The song which hit the top of the UK charts in 1985 is unique in the fact it’s stood the test of time as a classic track and when some ballads from that era have become a bit cheesy….this track is an absolute monster and made even better tonight by the inclusion of a local school choir to add to the band & audience mass sing along.

‘Hot Blooded’ was a fitting end to the show on a real hot night in Birmingham…..what a band, what a show. It’ll probably be a couple of years before the band hits the UK again…..and once again I will be there.

A special mention must go out to John Parr for his excellent 25 minute acoustic set and the brilliant Joanne Shaw Taylor for a superb albeit too short support slot.

Previous article
BAND OF THE DAY: FIT FOR AN AUTOPSY
Next article
LEPROUS OUTBREAK