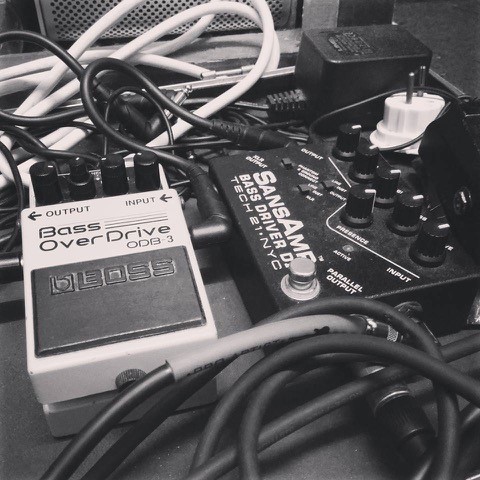 London proggers take you in the studio

“The inception of our band was a written manifesto, the contents of which essentially boiled down to one word: intensity,” asserts Andrei, guitarist of London quartet, THE EVER LIVING. “We realised we wanted to be a heavy band, but not necessarily a “metal” band in the traditional sense and we have evolved deliberately with that in mind,” continues bandmate, vocalist and keyboardist Chris; “We use brass, strings and piano; open droning guitars rather than palm-muted chugs, and avoid over-reliance on double kickdrum.” THE EVER LIVING’s newly released self-titled debut EP is most certainly expansive, its five tracks constructed around tidal waves of thick guitars, atmospheric instrumentation and vocals that roar from the murky depths. Here the band describe their time in the studio, recording the debut…

THE EVER LIVING was conceived when Andrei (guitars) wrote a manifesto for a band that didn’t exist yet, which at its most fundamental was about one thing; intensity.  This was exactly what Chris (vocals and keys) had been waiting for.  By passing demo projects back and forth online, the songs took shape quickly and before long they had the makings of an EP on their hands.

After hearing his band’s latest output, the choice of studio and producer with whom to fully realise these tracks was simple; Jonny Renshaw (Devil Sold His Soul) at his own Bandit Studios in Tetbury and so there the band recorded in late November 2015.

Rewind a month and we were a band without a drummer.  Rewind two and we were a band without a bassist or a drummer, and although still two members short, the decision was made to book the recording session.  The deadline was exactly what was needed to reignite the search for the remaining band members and the line-up was completed by Mark (bass) and finally Ross (drums) a matter of weeks before the session was due to start.

The trip to Bandit Studios was riddled with miscommunications and mishaps.  Having mistaken the rendezvous time for the set-off time, Andrei was enjoying a nice, relaxed pre-road coffee whilst Chris and Ross were eagerly awaiting his arrival in South Woodford to load the last few bags of cymbals into his car for the journey.  And whilst he waited patiently for their arrival at the final destination (the glorious accommodation of the Leigh Delamere Travelodge) they were blissfully heading in the wrong direction, having missed the M25 exit and were just a few junctions from being back at the starting point.

Ross smashed the drums on the first day, and that night began with good intentions to retire to the comfort of a pre-midnight Burger King at our Travelodge in order that he could finish the drum tracks unhampered by a hangover.  Tetbury is a lot more happening than you might expect. Ross’s punishment for an all-nighter was another half-day of loud noises before the drum tracks were complete.

Monday saw the start of an intense three days of rhythm guitars which along with a rare hip injury, gave Andrei sleepless nights.  The concept behind the guitar approach was to apply complementary tones to the layers, each panned separately in order to achieve a cohesive wall of noise. Rather than double-tracked and scooped, almost synthetic sounding and totally saturated guitars typical of much modern metal, the aim was to achieve a similar level of heaviness using open tones with classic amps pushed as hard as they would go.  Jonny allowed him to achieve this vision with surprisingly little compromise.

Mark was airdropped in for a couple of days to alternate bass tracking with laying down the first of the vocals, the live keys and the lead guitars.  He made light work of it, allowing Chris plenty of time for the last of the vocals.  Despite the remnants of a cold and a suspected sofa-dust allergy, a lot of what you hear on the EP vocal-wise are first-takes.  Chris’s impressively consistent and efficient performances helped us over the line a day and a half ahead of schedule.

Andrei and Chris once more disappeared into the Tetbury night to celebrate whilst Jonny was left to bring the individual elements together.   The mixes were finalised on 30 December 2015 and we could not have been happier with the result.  Intense.  Atmospheric. Heavy.  We achieved our goals and we did it on our own terms, attaining something truly unique sounding; a large element of which we owe to Jonny’s patience, suggestions and attention to our ideas.

The overriding impression of the session was that we got more out of Tetbury than we could ever have hoped, but the parting gift of bog-roll and Red Bull to Jonny went some way to restore the balance.

THE EVER LIVING released their debut self-titled EP on 01/04/16: http://goo.gl/VgLRSe