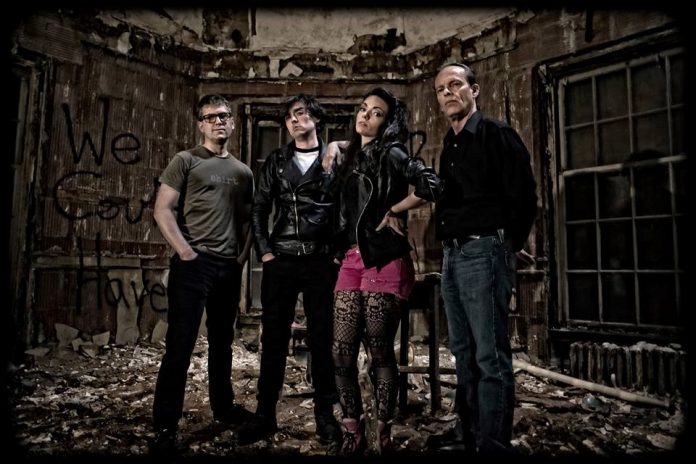 The New York quintet embody the very spirit of 1970’s punk that made CBGB’s, Blondie and The Ramones legendary. Formed in 2010 as Madame X by lovebirds Amanda Mac and Mike Staubb at Hofstra University, the pair quickly made their duo a family affair, with Amanda’s father Bill taking up duties behind the kit and their university professor, David Henderson, joining on guitar (fun fact: the band have 7 degrees between them!). It quickly became apparent that their passion was rooted in punk, Amanda’s attitude and snarl coming across early on, while the frantic musicianship behind made for a high octane, high energy set-up.

In 2014, just 2 years after becoming Bad Mary, it began to take off. They had been building themselves a reputation for short, fast and loud sets which would often end in ripped tights, scarred hands and exhausted legs, and this found Bad Mary sat amongst the first round ballot nominees in the Best Rock Song and Best Rock Performance categories for that year’s Grammys with tracks from their debut album Better Days (Ninja taking both categories and Forget About It in the performance category), an album which was followed by the Vans Warped Tour, recording 2 EPs with Fred Kevorkian (The White Stripes, Blondie & Iggy Pop), sound-tracking the NBA Finals and opening for one of the bands of the early noughties, Alien Ant Farm.

It’s now they find themselves progressing with their second album, and have found themselves a home for digital sales with ScreamLite Records. “We’re super thrilled!” read the Facebook post, and it’s understandable. This is a band that works hard and plays hard, their fun side showing through everything they record. When it came to Killing Dinosaurs, David epitomized just how Bad Mary operate, “…we’re really reaching back to early 70’s punk more than the contemporary stuff- especially the rawness of it…(we) write just what comes our raw and immediate.”

To connect with Bad Mary, you can find them at www.facebook.com/badmaryband, follow them on Twitter @BadMaryBand, check out their Instagram at Badmaryband, and you can also visit their website at www.badmary.com to grab their merch, physical disc and keep track of their upcoming gigs.

The Reissues are out on May 16th on all major digital stores (iTunes, Spotify, Amazon, Deezer etc) and on the Bandcamp page at www.screamliterecords.bandcamp.com