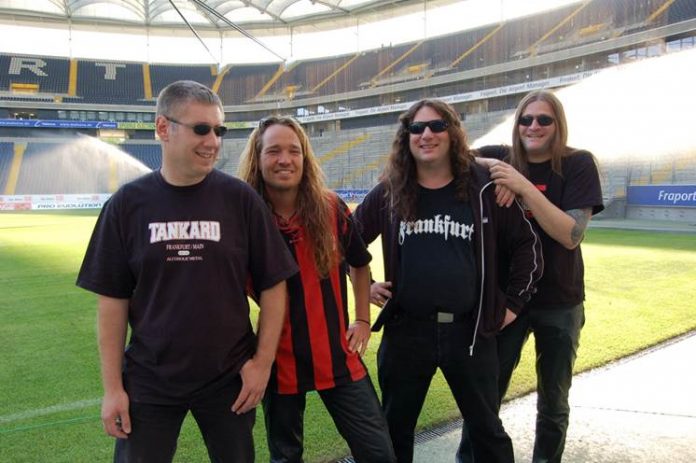 And a suitable soundtrack can’t be neglected for the occasion. The band’s 17th studio album entitled ‘One Foot In The Grave’ will be released on June 2nd, 2017 via Nuclear Blast.

But one week before its release, the iconic Frankfurt-based thrashers will celebrate another remarkable milestone in their career; all of Frankfurt are currently looking forward to the German cup final against Borussia Dortmund at Berlin‘s Olympic Stadium on May 27th. 30,000 Eintracht Frankfurt fans will be there following their team, and everyone able to watch the match will see TANKARD‘s performance of the club anthem ‘Schwarz-weiß wie Schnee’about 30 minutes before kick-off, in front of the Frankfurt stands!

The band has launched an official trailer for this special event over on YouTube.

The club anthem ‘Schwarz-weiß wie Schnee’ was recorded and released on a TANKARD EP in 2006; the band already had the chance to perform the song in the stadium of the German cup final against Bayern Munich that same year. Since that day, the track can be heard before every Eintracht Frankfurthome game. A re-release of the previously mentioned sold-out EP is tentatively scheduled for autumn 2017.