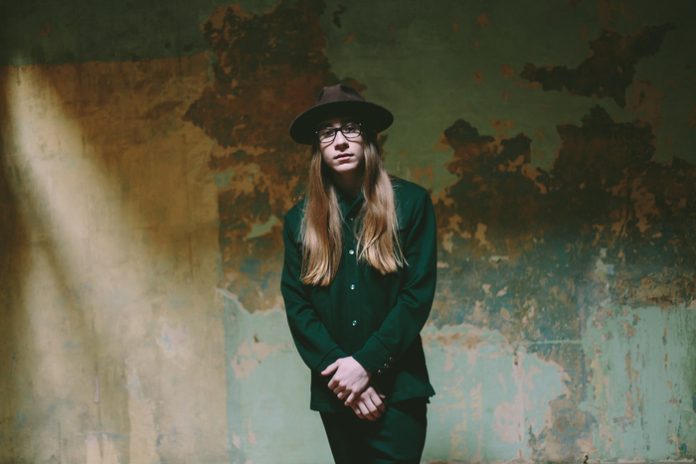 Up and coming singer-songwriter Sammy Brue is set to release his debut album I Am Nice on 16 June via New West Records.
The twelve-song set was produced by John Paul White of the Civil Wars and Ben Tanner of Alabama Shakes and recorded at their Sun Drop Sound studio in Florence, Alabama.  Hailed as a “prodigy” by Rolling Stone and a “wunderkind” by American Songwriter – and just turned 16-years old ­– Sammy is a remarkable young talent.  His keen ear for melody and sophisticated compositions embody the sort of wisdom, empathy and insight that is usually associated with more experienced songwriters and caught the attention of The New Yorker, The Wall Street Journal,The Fader, and more.
Sammy Brue‘s new video for track “I’m Not Your Man” is being premiered now on Noisey, watch it here. Directed by Black Balloon, the video was shot at the landmark Los Angeles book store The Bodhi Tree and sees Brue wooing a girl away from her current partner.
He cut his teeth busking on the pavement during the Sundance Film Festival whilst at school, with his performances turning the heads of famous actors, musicians and the media alike.  Among the first to champion Sammy’s talents was fellow artist Justin Townes Earle who extended an invitation to open for him after meeting Sammy and his dad on a tour stop.  After becoming a friend and songwriting mentor to Sammy, Justin featured him on the cover of his 2014 album Single Mothers.  Sammy is currently supporting Justin Townes Earle on his initial US tour dates in support of I Am Nice. See tour dates here.
I Am Nice will be available digitally, on compact disc, and vinyl and can be pre-ordered HERE.
A native of Portland, Oregon (now living in Ogden, Utah), Sammy Brue has been writing songs since he was ten-years-old after receiving an acoustic guitar from his father for Christmas. Influenced by the Bob Dylan, Johnny Cash, Leadbelly and Woody Guthrie songs played in the family car for years, Sammy quickly embraced the instrument and wrote his first song within two months. “When I started making music myself, I wanted it to have that old sound, because that’s what I grew up with and that’s what I love,” he said.
Before signing to New West Records, Sammy self-released two EPs, the latest being I Don’t Want You To Leave in 2015.  The devastatingly beautiful collection of songs touched on heartbreak, jealousy, religion and suicide, and garnered praise with Rolling Stone stating; “On songs like the title track, it’s nearly impossible not to think of a young Bob Dylan discovering Woody Guthrie, cutting his teeth in New York bars.”  When asked about recording his debut long player I Am Nice with John Paul White and Ben Tanner, Sammy said; “It was just a great experience,”admitting, “I was nervous at first, because I’d never recorded an actual album with real professionals and I didn’t know what to expect.  But eventually I told myself, “This is your album, this is what you want to do for the rest of your life,” and that’s when I pulled into another gear.”Tanner and White gently augmented his songs with spacious, evocative arrangements that showcase the strength and substance of his lyrics and melodies.
While juggling his school responsibilities, Sammy has maintained a workmanlike schedule sharing stages with Lucinda Williams, Hayes Carll,John Moreland, Asleep At The Wheel, Justin Townes Earle, Lydia Loveless and more.  He has also already appeared at the Newport Folk Festival and Summerfest.
With the release of I Am Nice, it feels like just the beginning of a very long music making career for Sammy.  “The whole idea of music, for me, is to make people feel certain emotions, and make them feel like I’m singing to them.” Sammy says.  “When people tell me they feel that way, it gives me a lump in my throat.  There’s endless possibilities to music, and I can’t wait to learn more about it and find new hooks and new ways that chords go together.”