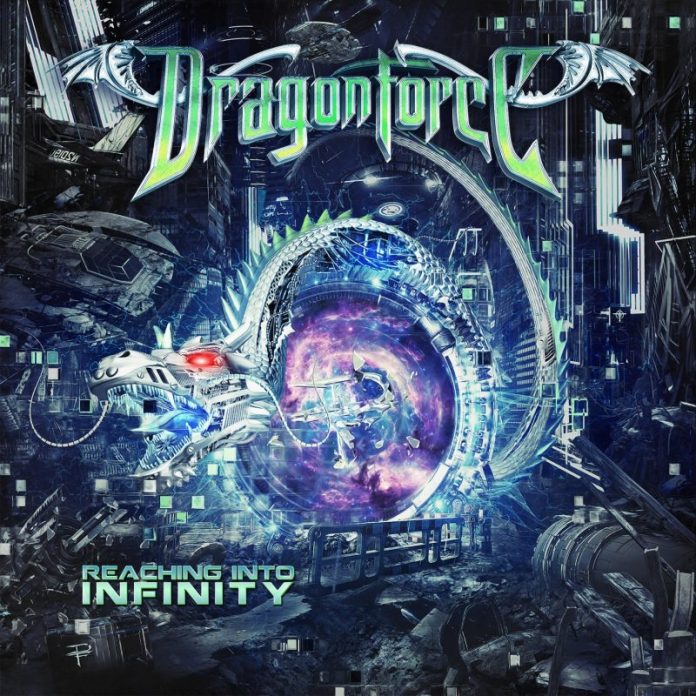 When this arrived at MV towers, we had to do a double take.

Somehow, somewhere along the way, Dragonforce have been around long enough to be at their seventh studio album. It scarcely seems possible, that those knockabout flashy kids who played knockabout flashy metal at one of those Black Crusade shows at the NEC all those years ago could have got to that point in their careers.

Either they are getting old, or we are.

Whichever it is, it does seem that the making of “Reaching Into Infinity” might have been a fraught experience. When bands say: “[I] lost my temper a few times – I think we all did at some point, because we wanted to deliver nothing but the best,” as main songwriter Frédéric Leclercq did in the build up to this, that is generally what they mean.

But he’s right. This is their best record. And as such, the issues were worth it.

They’ll probably hate us for saying it, but Dragonforce are all grown up here. It’s not like they’ve gone all po-faced and straight laced on us, and there are still elements of magnificently pompous power metal here (as there damn well should be!) but they do sound more varied than ever before.

“Judgement Day” is the first clue that things are a touch different this time. Coming on like Dream Theater at a million miles an hour (the keyboard solo is pure Jordan Rudess) it boasts Eastern influences and still packs a stadium bothering punch.

The tech wizardry is still there too, “Astral Empire” proves that point, but there is a definite wish to be in more outward places, “Curse Of Darkness” is a trad metal beast, and “Silence” is mid paced and could almost pass for stripped down.

That is not to say that the band have lost their sense of fun. “Midnight Madness” is ear to ear grins, but “War!” is dark, eerie and genuinely heavy and probably best described as a Dragonforce take on thrash metal.

An album that is not short either (with bonus tracks it clocks in at 13 songs and over an hour in length) but there is nothing approaching a dip in quality. “Land Of Shattered Dreams” has a chorus of the giant variety, but that – and just about everything else here – pales into insignificance when next to the absolutely monumental “The Edge Of The World” an 11 minutes plus epic that takes in what amounts to a potted history of heaviness.

That’s not to say that the rest isn’t a glistening triumph, whether it’s the actual last song “Our Final Stand” or the two bonus ones – the crushing “Hatred And Revenge” or the merry brutality of “Evil Dead” – this is a mighty statement of renewed intent from one of the UK’s most enduring, and best, metal bands.