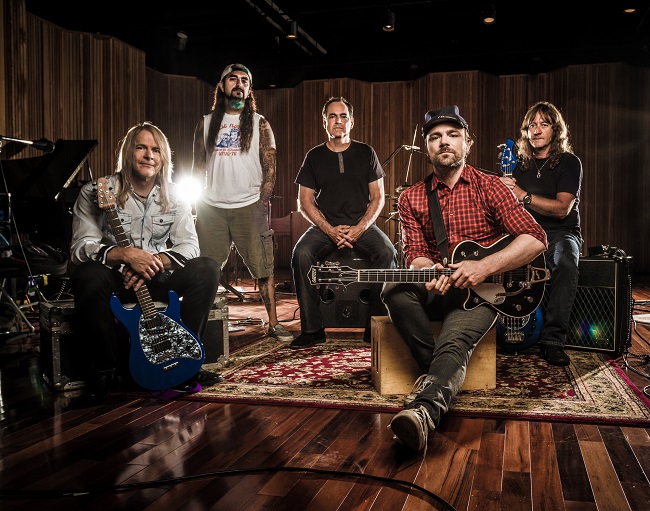 Flying Colors are thrilled to announce that they have been nominated for two Progressive Music Awards: Band of the Year and Album of the Year. Hosted by PROG Magazine, presented by Orange Amplification, and in association with currencies.co.uk; the ceremony is to take place at the Underglobe at Shakespeare’s Globe Theatre in London on September 3rd.

To celebrate this, they have released a new official video for ‘Fury of My Love’ and are offering fans the chance to win exclusive prizes; a Steve Morse autographed Music Man Guitar, a 20-minute Skype lesson and conversation with Steve Morse, a Signed Drum Head and a Flying Colors Vinyl Collection. To entershare your favourite Flying Colors memory and vote over at flyingcolorsmusic.com. The band will pick their favourite memory for the prize winners. Visitors can also vote for all Prog Award categories there.

Released in September 2014, ‘Second Nature’ (Music Theories Recordings/Mascot Label Group) is an enthralling journey through cerebral pop and authentic progressive rock that led Prog Magazine to declare them as the,“proggy archbishops of AOR” and Classic Rock Magazine to name it as one of the albums of the year.

The band’s mission was to team virtuoso musicians with a pop singer joining to create sophisticated music that was also accessible. In 2008, executive producer Bill Evans brought the idea to a group of renowned artists, and the resulting band became Flying Colors: Mike Portnoy, Dave LaRue, Steve Morse, Casey McPherson and Neal Morse. Together, they create a unique fusion of vintage craftsmanship, contemporary music and blistering live performances.

The Progressive Music Awards has established itself as one of the most respected events in the music calendar. The band is honoured to have been nominated, and warmly reminisces about working together. Steve Morsereflected: “Writing with Flying Colors is exciting, challenging, and a lot of fun, because so much happens so quickly. I love the musical results!” Continuing Mike Portnoy adds: “There is a real magic that happens when the five of us get together…it’s a combination of these five very different styles and personalities that make Flying Colors so unique and special.”

The album was lauded in the press, with magazines such as Guitar Techniques Magazine proclaiming that the band “creates musical magnificence.” Casey McPherson offered: “it’s a true, honest record. It’s what happens when a massively talented band pulls from the deep to express their art. I am privileged to have been a part of it.” Agreeing Dave LaRue said: “The process was very organic, truly representing the evolution of this collection of musicians. It was an honour to be a part of it.”

Summing up, Neal Morse recalls one particular moment: “The ‘Second Nature’ album was an amazing adventure for me! I remember being stuck in Philadelphia and driving in a snowstorm in the middle of the night spontaneously to get to the sessions. But when we began to write and record songs like ‘The Fury of My Love’ and ‘Cosmic Symphony’ it was all well worth it. One of my favorite albums of which I’ve had the pleasure of being involved.”