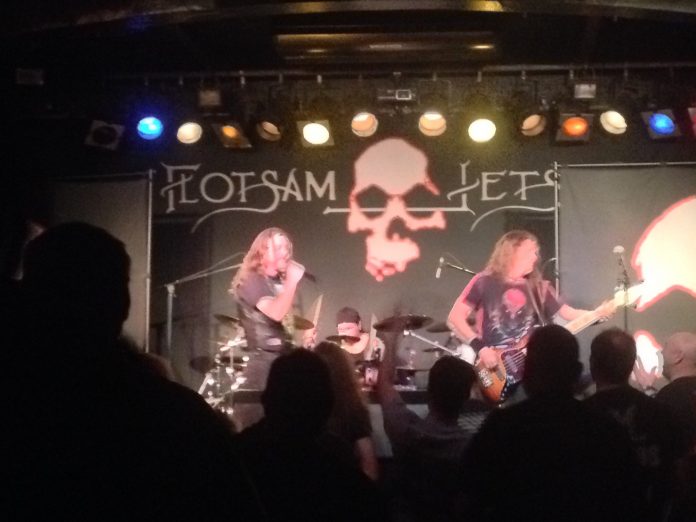 Flotz till death. Or Nuneaton at least.

Antwerp’s Bliksem (the name comes from the Afrikaans for ‘Punch’) have to overcome more problems in their opening song than most bands encounter on an entire tour. First there’s an issue with their amp. Then, as they prepare to start the last chorus after the guitar solo, the vocals go kaput as well. Singer Penny cuts a frustrated figure to begin with, but with power – just about – restored the Belgians get back to what they evidently do pretty well: old skool thrashing. Their twin Flying V battle plan extends to their new record too as “Room Without A View” thumps home on the back of some brilliant drumming from Rob Martin. Throughout their set the riffs are fast, the solos lightning and there is much to like here. With songs as good as “The Life On Which I Feed” already in the locker and their second album to drop this Summer, this could be the time for the band – already highly regarded in their homeland – to do it further afield and deliver their true knockout blow.

“When I was at school,” says singer Simon Hall as Beholder begin their set, “They said I’d never amount to anything. I say fuck you, I’m supporting Flotsam And Jetsam.” The big fella has a point. But then he generally does. From the first time MVM saw Beholder – at the rather odd Hellfire Fest at the NEC – to tonight and dozens of times in between, the same thing has always been true: the band have the soul of British metal and the anger, if not strictly the sound, of thrash. Few walk that line better than these local lads, as songs “Here I Stand” prove pretty conclusively. Album number three is due and “The Dance Macabre” from it, is crunchy headbanging fun. “The Host” – another new one – is better still, but both bode well for the record. Final word goes again to Simon: “Don’t listen to the politicians,” he says. “Don’t listen to the Police Force, listen to your own heart” and out of all the things he shares, you sense this is the most important of all. Beholder remain – as always – a formidable, and absolutely superb, live band.

Phoenix, Arizona natives Flotsam And Jetsam are one of the most seminal and revered thrash bands around. Now is not the time to talk about their legacy, their history, nor to mention the fact that Jason Newstead was in the band in the early 1980s for the millionth time. Instead, let’s just glory in the fact that a) they are here in the UK so soon after their Bloodstock appearance last year and b) they still sound so vital after all this time.

As soon as they emerge it’s clear that there’s nothing fake whatsoever about F and J. It’s also obvious that Eric Knutson, in many ways the glue that binds them together, can still scream in that wonderful way he always did.

With a set that is heavy on the group’s first two albums from the mid to late 1980s, their performance has a classic feel. Odd, perhaps that it is “Suffer The Masses” a track from their third record that provides arguably the early highlight. There is just one from their most recent “Ugly Noise” album, but “Gitty Up” shows they can still crank the anthems out when they want to.

“Dreams Of Death” drips with nostalgia, while “I Live You Die” still sounds like a threat that Knutson would carry out given half the chance – and the fact that Simon Hall appears on it only ups the aggression. “Escape From Within” showcases another side, with what passes at this gig as a tender side. Don’t worry, though, they’ve not gone soft. “Der Fuehrer” follows with five minutes of vitriolic nastiness to counterbalance things. Plus before the finish there’s a superb twin axe solo on “Smoked Out” and a mighty riff ushers in “Hard On You.”

The main set ends with “Doomsday For The Deceiver” the title track of that debut album, and there’s a really brief encore of “P.A.A.B” after which it is time for Knutson to drink, apparently.

When it happened that Flotsam And Jetsam had been around long enough to have a debut album that is nearly thirty years old who knows? But that anniversary will be reached next year. Worries about the future of thrash can wait. There are still bands who master the craft. Bands like Flotsam And Jetsam.