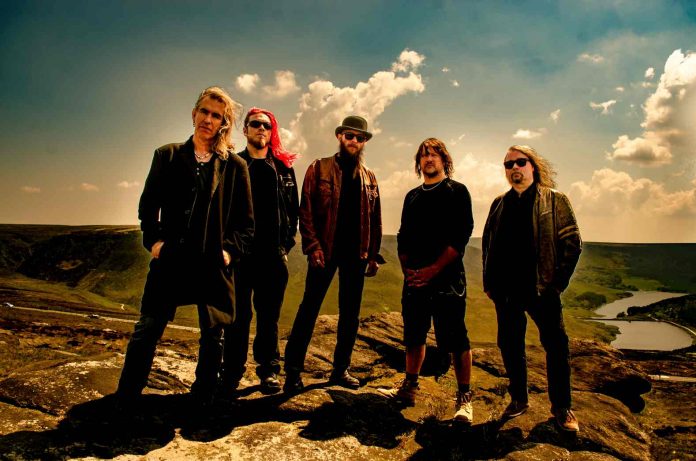 Returning with “Winter,” their first full studio album since their acclaimed “Between Dog and Wolf” kick-started a creative renaissance in 2013.  This album saw the band receive the best critical response of their career and top 30 chart positions in UK and Germany, their first in over 20 years, while Matt Reid’s 2014 documentary feature film “Between Dog and Wolf: The New Model Army Story” drew further interest to this most unique of groups.

“Winter” will be released on August 26th on the band’s own Attack Attack label via Red Essential in the UK and via earMUSIC worldwide. Formats include special bookpack CD, double gatefold vinyl, download and streaming. The album is a powerful and emotionally intense body of work. From the opening epic  “Beginning” through to the closing song “After Something” the album builds on the new directions taken by “Between Dog and Wolf”, yet also has familiar echoes of the immediacy and engagement of the band’s classic albums “The Ghost of Cain” and “Thunder and Consolation”.

Says founder, lead Singer and main songwriter Justin Sullivan:“Between Dog and Wolf” opened up a lot of creative doors for us, so it was exciting to go and look inside. The results were not necessarily planned – as usual we felt our way – but I think “Winter” has a really strong identity. It is very much the sound of people in difficult places – something that so many of us can relate to at the moment, on a lot of different levels. It is a much more of a band album than “Between Dog and Wolf” and we made a deliberate choice in mixing it to sound more aggressive and a little less polished”.

On August 19th 2016, New Model Army shall release a limited edition 1st 7” single, of 2 new songs from the album “Devil” and “Winter”. This will be the band’s 1st 7” since their top 20 duet with Tom Jones of The Rolling Stones classic “Gimme Shelter” issued on Food Records in 1993. The 7” will be available in independent stores and to pre-order along with the album via the following link.

The album features striking artwork by long time artistic collaborator Joolz Denby. It forms of a series which includes the above mentioned 7” and also the cover of Joolz’s own 7th album which will follow the New Model Army release later in the Autumn.

Formed by Justin Sullivan in Bradford (UK) in 1980, New Model Army’s beginnings were inspired by Northern Soul, Punk Rock and the incendiary atmosphere of the times. Since then, they have had a long, creative and eventful journey. They have been massively influential in ‘post-punk’, ‘folk-rock’, ‘political-rock’, ‘goth’, ‘metal’ and all kinds of musical sub-cultures but they have steadfastly refused to belong to any club that would have them as members.

Without a ‘genre’ audience, and never having had a Top 20 hit single in any country, New Model Army still have album sales in the millions, have attracted some of the biggest producers on the planet (Glyn Johns, Tom Dowd, Andy Wallace, Bob Clearmountain, Joe Barresi) and have built up an almost religious devotion amongst fans. Having grasped early on that the Internet was going to revolutionise the music industry, from the mid-1990s they set out on the now fashionable wholly independent path of controlling all aspects of their output. As a result, they have been perfectly placed to withstand the changes in the Industry and have outlasted most of their peers. There are very few bands in NMA’s position of being able to record and release what they like when they like, while maintaining a worldwide following and all without making a single artistic or commercial compromise.