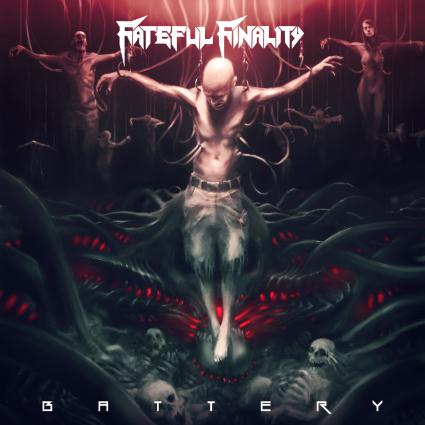 It’s a sad fact that largely, thrash has become one of the forgotten genres. The scene which once spawned some of the most viscerally exciting music ever is still mostly reliant on those bands that began the sound for it’s best releases.

The Big Four are still around, although how many of them are actually thrash these days is open to question, the likes of Exodus, Death Angel and Testament are still capable of something very good indeed, but for the big acts that’s not far off your lot.

Hold on, though, before you start giving this venerable old genre the last rites. In the UK we’ve tried over the years. Evile should have been huge but haven’t quite yet managed it, and bands like Eradikator, Reign Of Fury and Paraletica are all making great music, and now, help could be at hand from Germany.

Step forward Fateful Finality. These young Germans are set to release their second record “Battery” and if their first (2011’s “King Of Torture”) was raw and promising, then this sees them channelling that energy in a rather more cohesive way.

The four school friends get things going with “Possession” which riffs at breakneck speed, but then does something rather interesting. Like many bands in the modern era FF use two vocalists, but not many do it like this. Simon Schwarzer, who’s style is raw, dovetails with Patrick Prochiner, who has an ear for melody. The effect is quite original,  as most who do this do the growling thing. Finality don’t. That it is to say, in the manner of what we might call “proper” thrash, you can hear what both men sing, but the sound is given a modern feel.

Musically the album is excellently played, the machine gun drumming of Mischa Wittek to the fore throughout meaning that the overall vibe isn’t too dissimilar to early Prong on occasion, particularly on a track like “Unchained.”

Indeed the songs on “Battery” have a kind of youthful abandon that cannot be manufactured. “Dirt In The Closet” is bursting with energy, while the pummelling “Misfits” is full of fist clenching fury and “Under Pressure” is suitably urgent and claustrophobic.

“Suck Me Dry” has everything that classic thrash needs and is an obvious highlight here, and the record ends with the thumping riff of “Remain In Mind” which perhaps tellingly contains a chorus the lyric “one day persistence will pay off.”

As that line would indicate, “Battery” is the sound of a band that truly believes in itself. Whether it heralds the start of the long-awaited new thrash revival is too early to say, but the bottom line at this stage is that with “Battery” Fateful Finality have made a very, very good record indeed. What comes after is out of their control.

Previous article
Moonspell On The Road
Next article
Downfall Of Gaia