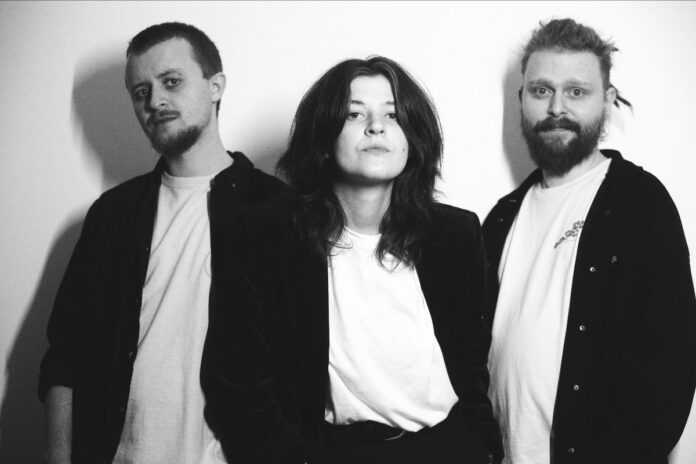 UK math-pop trio FES have today released their new single ‘Force Feed’, their latest offering from their upcoming debut album With Regards From Home, which will be released through Small Pond Records on 29th April 2022.

Commenting on the track, guitarist Pollyanna Holland-Wing says: “‘Force Feed was one of the faster written songs. It started off as a bit of a joke – Thinking that starting a song with a heavy breakdown would be funny, but then we decided that we actually quite liked it and continued to write onwards.

“Lyrically, the song focusses on a friends struggling mental health and feeling helpless to comfort them due to the pandemic.”

Based between their two homes of Peterborough and Leeds, FES are completed by Pollyanna’s sibling Tom Holland-Wing on drums, and family friend Matthew West on bass. Having formed in late 2016 after living and jamming together in a shared house, the band quickly established a keen underground fanbase for themselves touring the UK with their high-energy stage show, slick tempo changes, and undeniable math-pop melodies.

Previously known as Flat Earth Society, the band made the decision to change their name to FES after being contacted one too many times by actual Flat Earthers—a subculture of conspiracy theorists who believe that the world is in fact flat, rather than spherical. Yes, these people really do walk amongst us.

Taking inspiration from a multitude of various math-rock bands and pop artists including Fish Tank, Signals, St Vincent, Paramore and Biffy Clyro, their songs are leant additional depth by their deftly-penned lyrical observations on themes of identity, sexuality, mental health, nostalgia and grief.

Finishing up last year on a UK tour with Last Hyena and InTechnicolour, FES have so far released two four track EPs including You Do You (2017) and Lunar (2018) along with a split EP with Brighton math-rockers Exploder called Sleep Less in 2017.

“Originally the album started off as an EP to be released in 2020/21,” explains Pollyanna of the forthcoming record, “but as COVID hit we were forced to put that on hold. With so much time on our hands and gigging life on pause we decided to go BIG for our next release. We wrote new songs and tweaked the ones we had. The main themes of the album consist of dealing with death for the first time, self-reflection and mental health.”

Further album details will be revealed over the coming months.