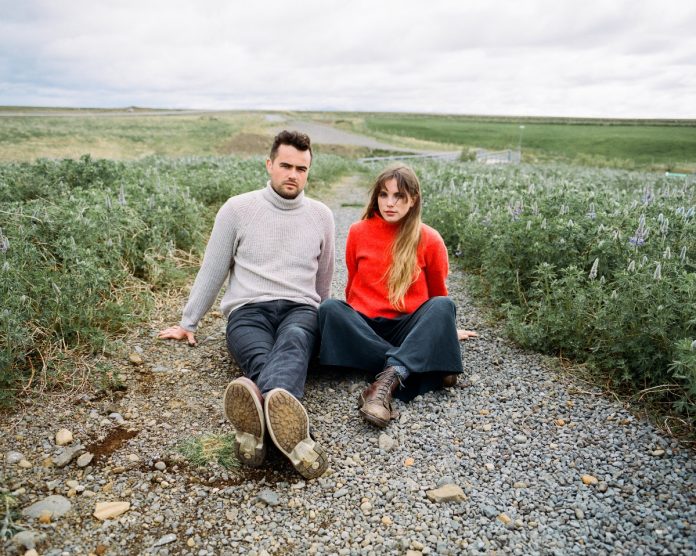 After the release and sudden success of their kitchen recorded and self-produced EP Made In Streatham last year; the duo have expanded their sound and songwriting into deeper and darker places with ‘Sickness’ alongside producer Michael Rendall (Pink Floyd, Paul McCartney, Echo & The Bunnymen).

The song builds from a quiet, self-destructive thought as though Issy Ferris is whispering in your ear, and becomes an outcry of both suffering and delight, led by Archie Sylvester’s powerful scorching guitar. With their combination of roots and blues, the duo deliver a sound which sits somewhere between Jack White and First Aid Kit.

Regarding the single Ferris & Sylvester say, “Sickness was one of the first songs we wrote together. It came quickly and felt powerful almost instantly. It’s about human relationships – the power and the frustration – and the desire to throw it all away.

“We recorded the track on our last day in the studio with Michael and continued into the early hours; it felt important to keep it raw and let the song speak for itself. Everything you hear was tracked live and a lot of it was recorded in one take, the guitar solo and vocals for instance. It’s our proudest piece of work to date.”
‘Sickness’ follows the release of the duo’s last single ‘Burning River’, which was also recorded with Michael Rendall and clocked up well over half a million plays in its first two months on Spotify. The songs were written during the pair’s writing trips to Iceland and find the band at their most raw and powerful yet.
Ferris & Sylvester received strong support from BBC Music throughout last year, with radio plays coming from 6Music and Radio 2, while they also performed a number of shows in association with BBC Introducing who have now named the band in their ‘Best Of’ lists for both 2017 & 2018.
The great BBC Introducing support continues for Ferris & Sylvester in 2019. The band will be performing a live session at Maida Vale aired on Cerys Matthews’ Radio 2 Blues Show on Jan 28th. Ferris & Sylvester will also be joining Huw Stephens and Steve Lamacq in Austin, Texas as they perform their debut BBC Music showcase at SXSW Festival on March 15th.

Last year Ferris & Sylvester won hearts and praise across the country as they played to thousands of people at huge shows with the likes of Eric Clapton, Robert Plant, George Ezra and Jade Bird, while also performing at major festivals including playing the main stage at Wilderness Festival and at BST in Hyde Park.

The band play their first live show of 2019 at Eurosonic Festival today, it comes ahead of the duo embarking on their first ever headline tour next month. It will see Ferris & Sylvester play nine-dates across the UK and Ireland, with a London headline show at The Lexington on February 11th. Full headline tour dates can be found below:
FERRIS & SYLVESTER FEBRUARY HEADLINE TOUR DATES

Tickets are available now through ferrisandsylvester.com/tour