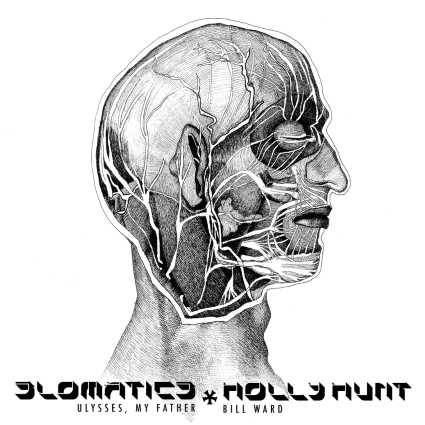 Released during the dying weeks of 2014 Black Bow Records is proud to collect two monolithic slabs of slo-mo riff worship together for this heavyweight 7” only release.

Formed in Belfast late 2004, Slomatics aim to reduce riffs to a primal state of heaviness, to produce music which whilst imploding under it’s own weight, creates a a joyous and euphoric state of wellbeing which can only be obtained with a slew of vintage amplifiers, fuzz pedals, analog synths and an alarming array of percussion instruments.
This has endured through UK tours, gigs in Europe, four albums and a mountain of split/vinyl/cassette releases.

The bands new lastest album Estron was released February 2014 to universal praise, including the Quietus best of 2014 and was nominated for the Northern Ireland Music Prize 2014.  Hear the SludgeLord: “Pounding drums, great vocals and gargantuan riffs. Embrace Slomatics, and succumb to the impending neck pain with open arms.”

Drummer Beatriz Monteavaro (ex Floor/Cavity) and guitarist Gavin Perry have demonstrated themselves as a loud and lumbering giant of the Miami music scene. The visceral impact of sound – the raising heart rate, neck chills, the warmth spreading throughout your torso – this is Holly Hunt’s raison d’être.

Find out more on the Holly Hunt here

Holly Hunt champions heavy metal’s potential to transcend genre and become a physical experience. Though stripped down to the most bare essentials, the duo’s innate technical chops, strong dialogue, and incredibly deep relationship to their gear produces a sound and style far beyond rudimentary tags like “heavy,” “hard,” or “brutal.”