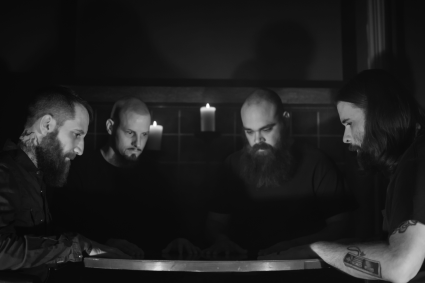 The name Brimstone Coven strikes a chord. At once, the moniker feels like something out of ’60s occult scene and the music that was influenced by it over the next two decades, starting with but certainly not ending with Black Sabbath‘s legendary debut. “When the idea for this band crept into my thoughts,” says guitarist/mastermind Corey Roth, “I knew that it needed to have that late ’60s/early ’70s, sound mixed with a creepy/witchy vibe that those years had going on. The brimstone, sulfur or ‘leviathan cross’ was a symbol that had always stood out to me and I knew that at some point, I wanted to use it for a band or project. With all of those ingredients stirring around my mind, Brimstone Coven was born.”

Roth and Brimstone Coven are certainly on to something. While the group—Roth, vocalist John Williams, bassist Andrew D’Cagna, and drummer Justin Wood—only formed four short years ago in Wheeling, West Virginia, they have a fantastic treasure horde of Appalachian darkness from which to pull. The Mountain Staters have, for example, the Mothman, a winged creature that emerged in the ’60s, Screaming Jenny, and the Phantom of Flatwoods. But these aren’t the only tales of terror from the 35th state. And it’s all imbued into Brimstone Coven‘s heavy rock.

“Being born in the early ’70s has a lot to do with it,”Roth recognizes. “I remember that time period having a strange and creepy air about it. I still feel it when remembering parts of my childhood. Folklore and legends could live and breathe and imaginations ran wild. People were experimenting with witchcraft, black magic and killer drugs! Occult symbolism was being used heavily by lots of bands. I am drawn to that darker vibe and I wanted to recreate it, but dig a little deeper into the darkness.”

Musically, the quartet are cut from the same cloth as Black Sabbath, Pentagram, and Led Zeppelin, but Brimstone Coven are also informed by the psychedelic movements of, say, Pink Floyd. The West Virginians are heavy, heavy, heavy, but also have a penchant for pushing the atmospheric envelope when the mood fits. If it sounds like the Brimstone Coven‘s sonic witchcraft has familiar roots in today’s contemporary scene, well, it does. When Roth, D’Cagna, and Wood hit a rhythm, they hit it hard just like their peers. But where most bands are content with to riff on an Iommi classic or an Osbourne vocal melody,Brimstone Coven open it up with three-part vocal harmonies, a trait more common with Mamas and Papas, Yes, and The Byrds.

“[Three-part harmonies] are definitely a bit of a lost art and not many artists are doing it nowadays, regardless of genre,” says D’Cagna. “We are very lucky in the respect that the band has three people with different vocal timbres that complement one another. That is a pretty rare thing, and we try to use it as much as we can without it being overkill. Also, I’ve noticed that modern bands are playing retro sounding riffs on vintage gear, but their tones sound more modern, or drowned in fuzz. To me, that dilutes the whole concept of how music sounded back then. We use very little gain/overdrive on our tones, which to me sounds more genuine.”

Brimstone Coven‘s gritty, groovy riffs and killer vocal melodies aren’t a new invention either. Fans of the Panhandle Staters have worshipped the group’s heavy rock style ever since Brimstone Coven and its follow-up II were self-released in 2013 and 2013, respectively. With ears to the ground, Metal Blade heard the promise in Brimstone Coven, inked a deal, and packaged both releases as a single set, calledBrimstone Coven in 2014. This was, of course, a set-up to the band’s first official Metal Blade long-player in Black Magic, which will be one of 2016’s early highlights.

“Black Magic has a nice mixture of tracks,” grins vocalist Williams.“We felt the three-part harmonies were very important on this album. We receive a ton of comments on how awesome they were on the old tracks and how they are a staple of the band. We didn’t want to flood the album with harmonies, but wanted to give enough to satisfy the ears of the listeners. Those harmonies have always added a silky smooth edge to the rock ‘n’ roll. A few of the tracks have a more retro feel than what we’ve done before, but to me still keep that Brimstone groove. I’m sure to a true ‘Brimstoner‘ Black Magicwill keep them very satisfied and hopefully pull in some more.Overall, we are really excited about howBlack Magicturned out.”

Black Magicwas mostly written over a year period—with some tracks harkening back to the origins of Brimstone Coven—against a backdrop of candles, incense, solitude, and a thick air of ganja. Not one to get lost in their own rarified air however, Brimstone Coven went into the studio in 2015 to capture their third full-length at D’Cagna’s Sacred Sound Studios in Ohio. “That’s where we’ve went for the other albums,”Williams recollects. “Professional atmosphere, but still has a ‘club house’-type feel. Stress free. Andrew produced the albums and we all contributed ideas and changes. Andrew does great work on anything that rolls into the studio. Since he’s in the band, knows the flow/feel of the material, and has 16 years of producing under his belt, it really makes the process come together quickly.”

With songs like “Black Unicorn”, “Beyond the Astral”, “Upon the Mountain”, and “The Eldest Tree”, Black Magic is destined to rule. Not only because Brimstone Coven can sing their bloody hearts out either. This is an album that’s hard to forget. It begs to be played, over and over. The strange allure is there, as if Brimstone Coven are summoning from the depths, while at the same time giving a wink and a nod to thePhantasm and Suspiria themes. If there’s one thing Roth wants fans to walk away with after experiencing Black Magic it’s this: “I would love for them to feel as if they’ve taken a journey to places unknown, within their own minds and a strong desire to return often. Behold. Believe.”

Indeed, Black Magic is upon us! 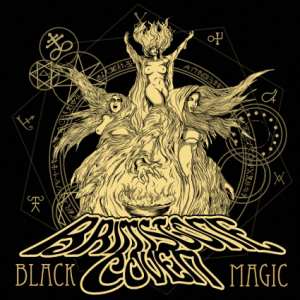