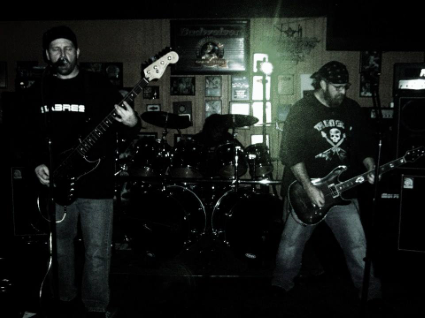 Their second album is out in a couple of days – its a stunner.

The Michigan City, Indiana members of Yellowtooth will finally release their 2nd recording, titled Crushed By The Wheels of Progress on Orchestrated Misery Recordings – it sees the light of day on 21st

Working with Year of Desolation guitarist/studio engineer John Hehman at BANG STUDIOS in Chesterton, Indiana, the band captured their brand of smoke filled, swamp soaked tunes & have unleashed 8 new songs.  With a hint of southern stoked riffs & catchy bass and drum rhythms, this 45 minute treat ventures into new musical territory for the band as it’s decidedly more aggressive than their initial recordings.  Building off the success of their debut CD Disgust the band continues to forge ahead and build the ‘tooth following.

Learn how to place music on itunes at ReverbNation.com

Yellowtooth will be doing sporadic shows in the region with fellow labelmates Psychomancer over the next 6/8 months to push the new release with shows in Chicago, Milwaukee & South Bend.