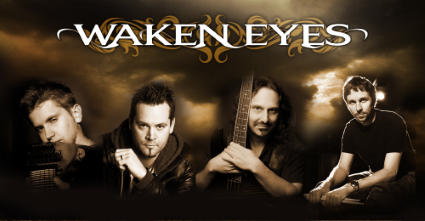 Waken Eyes was started early 2013 by Tom Frelek after his old band had gone on hiatus. Tom was still playing in his own instrumental band but wanted to create a prog album that was heavy, melodic, cinematic and with vocals.

When Tom finished writing all the demos for the album he already had musicians in mind to play on this record. Marco Minnemann was one of those guys he wanted to get after hearing him play on Paul Gilbert’s spaceship one DVD. Hearing how amazingly talented Marco was struck him to send him an email with a few demos attached. He complimented the demos and agreed to play. He completely added so much life to the songs and Tom was almost in tears at one point! The rest is history!

After Marco recorded all the drums (in 3-4 days!) he sent upgraded demos to Mike Lepond of Symphony X as he’s an amazing musician. He recorded his parts fairly quickly. Needless to say Mike’s playing was superb and brought the tracks to life!

As for vocals, Tom got Henrik Bath to sing on the album. Tom heard of Henrik and his band Darkwater from a good friend of his. Tom was instantly blown away by his vocal ability. He contacted Henrik and sent him the demos with Marco and Mikes’ parts on them. The recording process started shortly after. The life that Henrik brought to this album is indescribable. There is so much passion and honesty in how Henrik sings. Tom had many “wow” moments when Henrik sent over his vocal takes.

The theme of the album is about being fearless and every song has something to do about fearlessness. The theme came from the struggles of everyday life that everyone deals with. How people, emotions, media, governments can enforce fear upon you to make you think a certain way to more or less control you. It’s an album for those who struggle to stand up for themselves and can’t let their voice be heard.
Certain songs have lyrical ideas about war, media, falling in and out of love, spirituality and faith, good and evil. To sum it up, it is an album about hope. Sounding dark at times but with hope at the end of the tunnel.

The band reckon“Exodus” is a very impressive and diverse album that will surely appeal to fans of progressive metal, progrock and melodic metal. The album has a great mix of catchy melodies, challenging instrumental parts and epic cinematic movements that will surely capture the attention of the musical community. Everything comes together perfectly in the title track that ends the album with its 18 minutes long epic filled with melodies, progressive parts and a good dose of feeling.