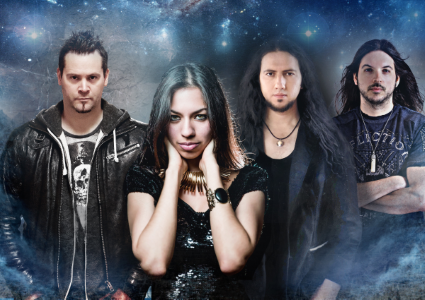 Power metallers with a brand new album out

Founded in 2012 by guitarist and composer Michael Alexander, UNIVERSAL MIND PROJECT began as a collaborative project between musicians from all around the globe to finally shape into a band with a solid nucleus consisting of Elina Laivera and Henrik Båth [Darkwater] on vocals, Michael Alexander on guitars and growls and Alex Landenburg [Luca Turilli’s Rhapsody] on drums.

In a mix of perfectly executed modern progressive/power metal combined with the unique diversity of male and female vocals that stylistically spread from lyrical and fragile to soothing and powerful, as well as the use of growl vocals at parts of the record, the debut album of the band “The Jaguar Priest” encloses a most impressive league of artistic creation.

The album was composed by Michael Alexander and Elina Laivera and a lot of hard work was put into writing the best possible vocal lines for each guest vocalist gracing different songs on the album. The result is truly rewarding. Apart from Elina Laivera and Henrik Båth, the album also includes performances by Nils K Rue [Pagan’s Mind], Mark Jansen [Epica, Mayan], Charlie Dominici [ex. Dream Theater] and Diego Valdez [Helker] -forming an incredibly powerful team of vocalists, each of whom add their own distinctive style to the songs.

One should find melodic and mellow passages, yet really heavy moments on ”The Jaguar Priest” -all combined with philosophical, spiritual and other diverse themes that inspired the dynamic duo of Alexander and Laivera along the creative process of the album.

Expressed through catchy hooks, bursting riffs, killer guitar and keyboard duets, as well as super melodic choruses performed by top names of the metal scene, the sensational power-sound of UNIVERSAL MIND PROJECT has come to blast your speakers off and is destined to capture full attention within the metal music community.