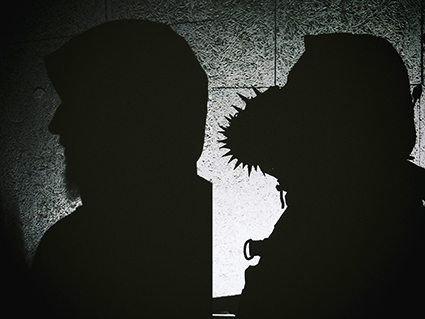 Ever thought you were an ape being toyed with by Lucifer? Read on
Blackened Death Metal juggernaut Tsar Bomb formed in 2009 in Malaga Spain.
After several line-up changes, the group finally coalesced into the nihilistic atomic monster it is today: Ocram (Vocals & drum programming) and Ivan (Guitars, bass & drum programming).
With the band set, the Neowarfare EP was released in early 2012. Their full-length debut of the same name was unleashed on an unprepared public on October 2012. Themes centered on the destruction of humanity through the unleashing of the most massive weapons of destruction developed by a degenerate group of apes as Lucifer looks on with sadistic pleasure.
The aggressive and speedy playing of Ivan perfectly encapsulates the misanthropic and destructive title of the album. Ocram’s blackened vocals channel the Prince of Darkness in a way that seems beyond the capacity of any simple man. Tsar Bomb gave a pleasant surprise to many of us with their last release:  a great line-up with a powerful live show, sharing the stage with bands such as Enthroned or Benighted.
With 2015 comes the imminent release of ‘Exterminans IX:XI’ and the band steps heavily to a higher level of technicality and aggressiveness. ‘Exterminans IX:XI’ is an album fundamentally inspired by the Book of Revelations, and it manages to combine the esoteric side of the biblical scriptures with the well known warmongering and occultist world of Tsar Bomb, displayed on some very technical and destructive compositions that won’t let the listener rest for a moment. Although the band actually counts on just two members, they don’t discard the possibility of hitting the stage again.
Facebook: www.facebook.com/tsarbombofficial
Bandcamp: tsarbomb.bandcamp.com
Twitter: twitter.com/TsarBomb_Band
Soundcloud: soundcloud.com/tsar-bomb