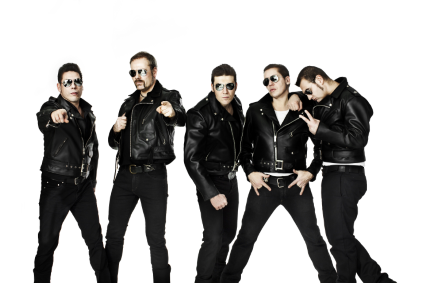 Rock n roll from Norway. Their new album is out later this month, and brother, they rule.

This insight might not necessarily be a new one, but: rock’n’roll isn’t something you can learn, it has to run through your veins. This music is more than a stylistic direction; it’s both an attitude and a philosophy. So when Kai Kidd, guitarist of the Norwegian rock band The Carburetors, jumps into the auditorium with his expensive Gibson Les Paul Custom Shop, regardless of the possible consequences, breathes fire, stands on the bar, kicking half-full beer glasses out of the way, and destroys one of his instruments during every show, he’s just following his natural instincts. Because The Carburetors, who have been haunting Europe for almost 15 years, are always one hundred per cent authentic in everything they do. Leather jackets, black jeans, sunglasses, cowboy stance: this band doesn’t pander to any stereotypes but ostensibly lives its rock ideology. And, if necessary, looks death in the face laughing. That’s why the title of their latest album Laughing In The Face Of Death has turned into an awesome manifesto of handmade rock music with definite anthem potential. A recording which leaves no questions unanswered and nothing to be desired. In other words: real rock’n’roll!

The five-piece have compiled eleven songs on Laughing In The Face Of Death, ten brand-new original compositions and ‘Don’t Touch The Flame’, their contribution to the Norwegian Eurovision Song Contest, which took them to the Norwegian national finals in 2012. Because that kind of thing is also possible for, and at the same time typical of, The Carburetors: nothing is taboo to them, they feel at ease in all kinds of situations. “Eurovision was a great experience for us, particularly since we didn’t have to bend over backwards but presented a typical Carburetors number,” drummer Chris Nitro explains. Reactions to their participation were unanimously positive and proved to the band that their music has definite mass appeal, so: “It’s our target to reach a broader audience with the new album and stress our live potential even more strongly.”

In line with this, Laughing In The Face Of Death – unlike their three previous studio recordings Pain Is Temporary, Glory Is Forever (2004), Loud Enough To Raise The Dead (2006) and Rock’n’Roll Forever (2010) – was not only composed by all five band members together, but also recorded practically live in the studio. “The whole band was in the recording room and performed the songs together,” Chris describes the production sessions at the Oslo DuB (engineer: Endre Kirkesola) and the Laidback studios (engineer: Jørgen Granholt Henriksen), “which was more demanding than a regular production, but the result sounds so much more alive and dynamic. Now at last the sound comes across the way our fans know it from our shows.”

The energetic recording procedure suited the eleven songs perfectly. Typical rock numbers such as ‘Shot Full Of Noise’, ‘The Undertaker’ and ‘The Wolves Are Gonna Howl Tonight’ highlight The Carburetors’ verve and sound out extremes on ‘(Find The Man Who Turned) Water Into Wine’, which even ventures in a heavy metal direction with its consistent double bass drum. A conscious contrast is the final ‘(Tonight We`re Gonna) Die Like Heroes’, a ballad to which Geir Bratland of their chums Dimmu Borgir contributed the piano parts. Talking of which: ‘Lords Of Thunder’ features a spectacular duet by The Carburetors vocalist Eddie Guz and Dimmu Borgir frontman Shagrath. Nitro: “At the end of the day, Dimmu Borgir are a product of the same musical tradition as we are, they’ve also grown up with acts such as Motörhead, Rose Tattoo and AC/DC. So looking at it from that point of view, this duet fits in perfectly.”

The cover artwork designed by Finnish artist Jan Yrlund, which stylistically brings to mind early Kiss and Iron Maiden albums, is also in line with this general direction. Nitro: “We wanted the artwork to be larger than life and underline that our music is no minority genre and reach a broader target group with Laughing In The Face Of Death. This album simply features good songs with strong hooks, a catchy chorus and a powerful rock’n’roll sound.”