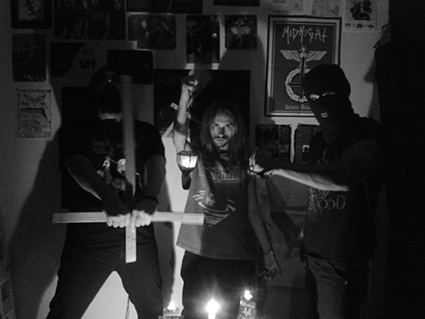 In the first of two special featured band slots, we bring you the latest on the the people behind one of the most brutal split releases of the year
Greek metal band, SWAMP, was initiated in 2000 under the guise of POSER HOLOCAUST.
After the release of one demo tape, featuring several cover tracks, Nyarlathotep and Splatter changed the name to SWAMP, added Skullcrusher to the line-up, pursued writing and recording blackened thrash metal songs in their own underground fashion, and published a limited demo cassette, “Live Holocaust,” in 2004.
A few years later, SWAMP published their “Praise the Goat” demo tape, soon followed by the departure of Skullcrusher and replacement-Schizo. In 2010, SWAMP’s “Nuclear Death” EP was released by Polish label, Time Before Time Records and was subsequently repressed by Chilean labels, Proselytism and Dog Fight Records. In 2014 Schizo was replaced by Psychopath, and SWAMP invoked their debut full-length, “Underground Manifesto,” featuring special guests from VARATHRON and MYSTIFIER.
The full-length was released in CD format by Mexican label, Atolinga Records, on vinyl format by American label, Stygian Black Hand, and on cassette format by Greek label, Fistbang Records. 2014 also saw SWAMP’s appearance on the “Evil Spells” LP compilation published by Stygian Black Hand alongside bands like POSSESSION, OCCULT BURIAL, SPITE, etc.
In 2015, SWAMP carried on in the blackened death/thrash style with two new songs and a TORMENTOR cover for the split release, “Necromantic Passages,” with American death metal act, FETID ZOMBIE.
The cult is alive!
Facebook fanpage: www.facebook.com/pages/Swamp-Greece/1419544431639242