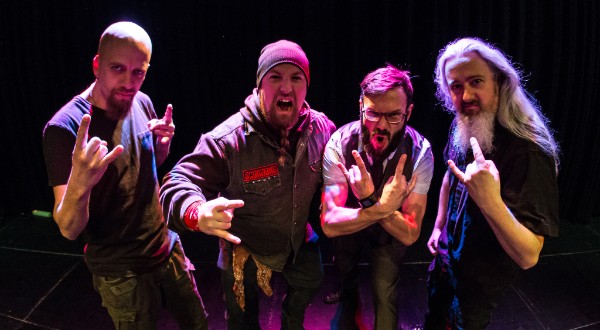 Danish groove metallers are releasing their debut next week. And its free.

For many, the name Spitanger will be a brand new acquaintance, but that could very well be about to change! The 1st of November this year, the Copenhagen based quartet are releasing their very first full length album through Fast Beat Records, simply titled “SPITANGER”, and the band seems to already have made quite a stir on their home front.

According to Spitanger themselves, the musical inspiration has solid roots in the earlier groove metal scene, with clear parallels to giants such as Testament, Pantera & Machine Head, but also more temporary influences such as Slipknot, In Flames and Lamb Of God, can be heard on the 48 min. long album. But despite standing on the shoulders of such mastodons, Spitanger stresses that they have put a lot of effort into creating their own unique musical expression, and that they themselves are very pleased with the result! A dark heavy bluesy groove, when slowed down, and a brutal thrashing and battering, when the tempo speeds up – all spiced with vocalist Mario Giovagnoli’s incredibly flexible singing from ripping death growls, over Anselmo-like scream and rock vocals, to totally clean parts and mellow harmonies.

A very diverse, and seemingly brilliant beginning for Spitanger, according to one very impressed and well reputed Danish reviewer, as he writes in his column: “…I am frankly impressed with how amazing it is! It is rare to encounter a debut album that is so complete and well thought out!” The band states, that the Production itself has been made out to be very organic and easy on the ear, yet still extremely powerful and rounded. It is interestingly enough also entirely produced, engineered, mixed and mastered by Rasmus Toftlund – the guitarist, in the Copenhagen based facility Fast Beat Studio.

One twist in all this is, that even though it will be distributed through the usual channels of major digital platforms such as ITunes, Spotify, Apple Music, Google Play etc, the band has surprisingly enough decided to give the entire album away for FREE as HQ download through their website:

As Rasmus Toftlund explains it: “Sure we have spend quite a bit of money on making this album, and of course it would have been nice to see some of that float back in as sales revenues – but lets be realistic! An alarmingly small amount of artist’s today can actually make money out of their debut, and in the end we’ll rather have people actually get their hands on it and hear the damn thing, than try to make a few bucks out of it!”

The future will tell if Spitanger indeed can raise people’s eyebrows enough to bring it to the next level, but with such a confident first release, the stage definitely seems all set and ready!