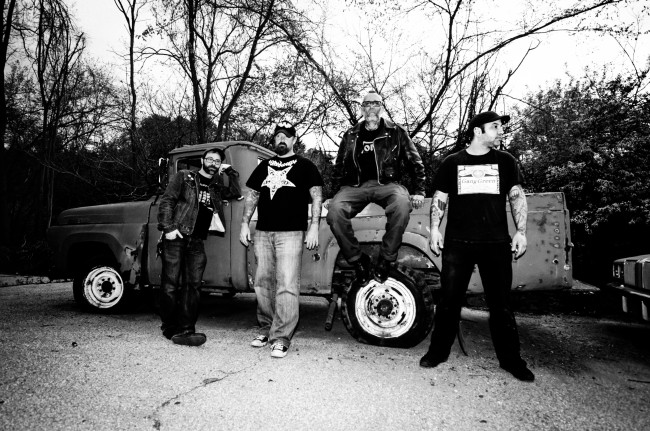 We like these guys because a) our stupid editor replied to the wrong email and they were really cool about it. And b) they sound like Motorhead. We like them so much we are streaming their album in full.

Six Speed Kill. Four grizzled old guys hailing from Pittsburgh, PA who got together to play loud, fast, and heavy. And they might not be entirely sensible (or sober)

Nick – Vocals/Rhythm Guitar and general good looks for a chubby ginger dude
Luke – Lead Guitar and a piss poor attitude
Stevie D – Bass and a lover of mankind, but don’t hold that against him. He’s really not that bad.
P.J. – Drums and being P.J. Being P.J. normally means using a fine tooth comb to remove bits of week old pizza from his beard.

Says Nick: “I guess we are supposed to tell you about this band now. I was bored one day around June 2013 because I probably ran out of beer or hamburger meat.”

His quest began to find a few low-lifes like himself that at least said they could play an instrument. First up was Luke and again over to Nick for the description: “upon meeting Luke it appears he may have a bit of a Napoleonic complex due to his short stature yet possessing the anger of a wounded chimpanzee. However, he seemed like he could play enough for the rest of the band to look past his ornery nature.”

Then we might as well let him discuss all his mates: “Up next is the man they call Stevie D. Steve is a distinguished gentleman, a tall drink of water, with the temperament of a well fed golden retriever. That man can also pound on some low end strings, and since he would offset the previous discussed member it was a great fit instantly.

“Finally, after a little while of jamming and learning our sound we did make a small lineup change which will not discuss past here. Enter the P.J. Who is the wild beast of a man who entered the room and sat down behind a equally shaggy drum kit? Well the answer did not come with words but instead with the furious pounding of drums, and a little odor, but mostly drums.  The lineup was now complete. Completely Awesome? Completely Scary? Completely Insane? We’ll let you be the Judge.”

Six Speed Kill started playing shows in December of 2013 and have not looked back. SSK have played with a bunch of  great Pittsburgh bands as well as national touring acts including D.R.I., Against the Grain, Lo-Pan, Call me Bronco, Brief Lives, Flat Broke, The Memphis Murder Men, The Midnight Ghost Train and others. With a new full length album and out of town dates on the horizon, the future looks promising for these idiots.

Finally the band say: “Come to a show and check it out for yourself. The good news is, even if you hate it we don’t play venues that don’t let you buy or bring booze. So come around, get drunk, we’ll play loud and you might have a damn good time.”

They aren’t lying. Here’s their album. It’s rather good.