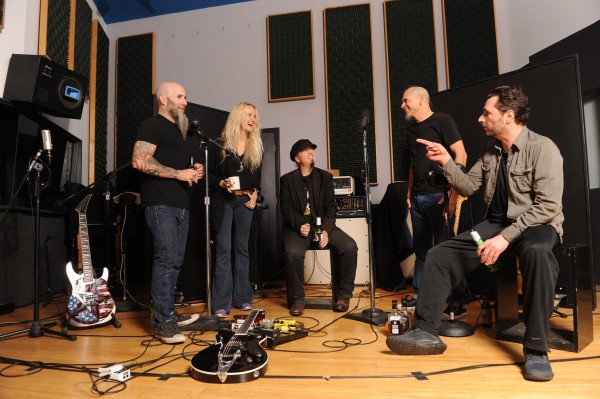 The album’s out next week – and our Donnie interviewed them – so just who are Motor Sister?

For his fiftieth birthday, Anthrax guitarist Scott Ian wanted one present more than any other – the reunion of one of his favorite unsung heroes, Mother Superior – only he wanted to be a part of the lineup.

“They’re a great, classic band that hit me in the same spot as all my favorite ’70s bands, whether it’s UFO, Ted Nugent, Cheap Trick or KISS,” Ian explains. “I knew getting to play with them would be like joining KISS and getting to record all my favorite KISS songs with Gene and Paul.”

Thanks to Scott’s wife Pearl Aday, who has been working on her solo career with Mother Superior front man Jim Wilson for years, all it took was a quick phone call and the stage was literally set for Scott’s dream gig. “I wanted to cherry-pick a set list of my favorite Mother Superior songs and get these guys together and have the concert at my house,” Ian says of the event that eventually led to an album.

“[Mother Superior] frontman] Jim [Wilson] was totally into the idea. Pearl was a huge Mother Superior fan from way back and was in. I asked my good friends Joey Vera (Fates Warning/Armored Saint) and John Tempesta (White Zombie) to be a part of it because I knew they were both big fans as well and with no hesitation they said, ‘We’re in.'”

Wilson, too, was stoked by the opportunity to dust off some songs he hadn’t played since his LA rock trio broke up in the early 2000’s after releasing eight albums and playing as Henry Rollins’ backing band.  “I definitely didn’t need any arm-twisting,” he says. “I was totally flattered and thought it was a great idea. I figured it would be fun and it was a great opportunity for a new chapter to be established in order to move forward.”

The band called itself Motor Sister after the Mother Superior song “Little Motor Sister” and got together the day before the party to rehearse in Ian’s jam room. For the party, they invited about 25 friends who were already Mother Superior fans and appreciated the significance of Wilson re-opening the vault.

“The energy in the room was amazing and we were great as a band playing those songs,” Ian says. “It felt awesome. We had no intention of doing anything after that. It was just something we did for fun and to celebrate my birthday.”

The crowd for the show may have been small, but it included several industry veterans who couldn’t stop raving about the performance. In no time, word got back to Metal Blade A&R man Mike Faley, who immediately realized the potential to capture the lightning in a bottle vibe the band exhibited that night and put it out on a record.

“He called me up and asked if I had any intention of doing anything more than that one show,” recalls Ian. “And I said, ‘It’s funny you should mention that because I was sitting in the kitchen talking to Pearl and I just said to her, ‘Imagine if we could make a record.’ And they said if I was serious Metal Blade would be happy to put it out.”

After the original Mother Superior broke up, Wilson recorded a solo album and played with Daniel Lanois, Emmylou Harris and Pearl. As rewarding as those projects have been, he was excited to return to the pedal-to-the-floor groove-rock he pursued for almost 18 years with Mother Superior.

“The minute I started to play with Scott, Joey and John the chemistry was amazing,” Wilson says. ” We sounded like a band that had been together forever. It was fresh, it was powerful. The original band had moments, but it was a power trio and it just never got its due. We were either a little ahead of our time or a little behind our time. When Pearl Jam and Soundgarden were taking over, we were rock and roll fans. We were being driven by classics like Humble Pie, Cream and KISS. Scott, John and Joey all come from that same place, too, so when we got together to play these songs that Scott had chosen it was like we were putting a fresh coat of paint on these old songs that still held up.”

Enthralled at the idea of making a record of his favorite Mother Superior songs, Ian emailed  producer Jay Ruston (Anthrax, Steel Panther) and asked if he thought it was possible to recapture the same spontaneous energy Motor Sister generated at their makeshift gig, and if an album could be recorded quickly. “He said, ‘Yeah, we can make the record in two days and we can make it sound really good.’ So that’s what we did,” Ian says. “A week and a half later, we made the record in LA over a two day period. We recorded the whole thing live in the studio and the set-up was just like it was at my house.”

For Wilson, revisiting Mother Superior classics with a second guitarist leant a new urgency to songs like “Devil Wind,” “Beg, Borrow, Steal” and “Dog House.” “I was always the sole guitar player of the original band. I overdubbed rhythm guitar in the studio, but it was all me,” Wilson says. “Now, there’s definitely a metal edge to these songs. It’s still blues-soaked rock and roll influenced by Zeppelin and the Stones. But it’s so great having Scott’s guitar in the mix. He’s playing on the left side and I’m on the right. Sometimes I jump in the center for a solo. But when you listen to the album it’s so cool to hear the two guitars and know who’s doing what. So if I’m doing a bluesy solo, you hear Scott on the left side adding his touch to the rhythms. And it sounds like him. I’ve never heard these songs sound more exciting.”

Ian, too, couldn’t be prouder of the album and insists he favorite tracks change almost every day. “I always go back to ‘Devil Wind’ because there’s something so epic about it,” he says. “If they ever finally make ‘The Dark Tower’ by Stephen King into a movie or TV series, ‘Devil Wind’ sound be the theme song.”

While everyone in Motor Sister is busy with their day jobs, they are all interested in playing live as much as possible. “We are a great live band” Ian says. “We proved it to ourselves in my jam room. It was our ability to play live together that made this happen and I can see us getting onstage and  playing this shit back-to-back, Ramones-style, and just blowing people’s minds with the power of these songs. And the door is always open to write more material because Pearl and Jim are always working together and I’m always with them. So we’ll see what happens in the future.”

“It would be great to keep this thing going,” Wilson concluded. “I enjoyed playing these songs with Motor Sister more than I’ve ever enjoyed them before. Scott’s like a brother, John Tempesta is such a monster drummer, Joey [Vera] is incredible and Pearl’s harmonies and background vocals are amazing. This feels like a continuation of trip I started long ago and it’s a real blessing.”