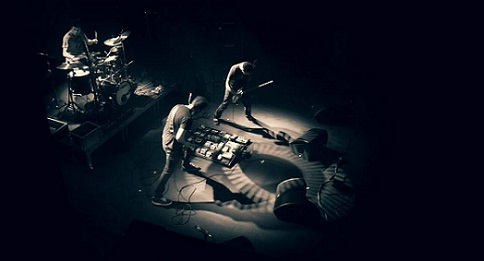 Swiss post hardcore merchants
Formed in Geneva in 2006, Lilium Sova plays a schizophrenic instrumental and experimental Post-Hardcore.Since its first gigs, with its unusual line-up and its tendency to play a limitless music, this Swiss band leaves no one indifferent.
Lilium Sova got great reviews for its two first albums, “Tripartite Chaos” in 2008, and especially with “Epic Morning” in 2012. This last effort ended the Saxophone/Synth period. Since then, a cellist/guitarist arrived in the band, adding those instruments to the remaining duo : Bass/Drums.
In 2016, after 10 years of activity, Lilium Sova releases its third album called “Lost Between Mounts and Dales / Set Adrift in the Flood of People”, a concept album in two parts, murkier and more melodious, in which the band steps out of its comfort zone without losing its identity.
About four years after the acclaimed ‘Epic Morning’ (2012, Cal Of Ror Records), Swiss post-noise-hardcore/jazz/experimental trio Lilium Sova will celebrate its 10th Anniversary with a brand new full-length album called ‘Lost Between Mounts and Dales / Set Adrift in the Flood of People’ planned for a CD/LP/Digital release on 1st October through Cold Smoke Records (Challenger, Das Röckt, Ogmasun…) andURGENCE DISK Records (Rorcal).
In the meantime, the band unleashed a few days ago a first audio excerpt from this upcoming album with “Pakeneminem” available right now.