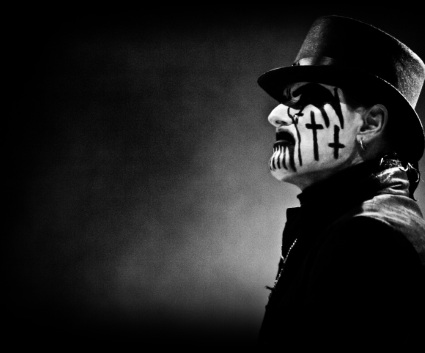 Over the course of twenty-nine years, among innumerable trends, ebbs and flows of the music industry, King Diamond remains as one of the most prolific and important figures in metal. With a career so extensive, anniversaries of note have come and gone, but in 2015, King Diamondcelebrates an anniversary few acts survive to celebrate: 30 years as a band. In 1985, the departure of King Diamond, guitarist Michael Denner, and bassist Timi Hansen from Mercyful Fate marked the beginning of their long and storied career. Through a myriad of tours, albums, and inenvitable lineup changes, King Diamond, guitarists Andy LaRocque (the only other original member), Mike Weed, and drummer Matt Thompson stand poised to carry the torch even further into the future.

Of course, that’s not why we’re here. We’re here, and you’re reading this, to raise our collective glasses in tribute to so many years of some of the most important metal put to tape. Since the band’s inception, fans have been treated to 12 studio albums, most of which are concept albums:Fatal Portrait (1986), Abigail (1987), Them (1988), Conspiracy (1989),The Eye (1990), The Spider’s Lullabye (1995), The Graveyard (1996),Voodoo (1998), House of God (2000), Abigail II: The Revenge (2001),The Puppet Master (2003), Give Me Your Soul …Please (2007). Two of metal’s most influential labels have had the pleasure of releasing these records: Roadrunner Records, and Metal Blade Records. A selection of songs from those releases have been handpicked by King himself and assembled into a two-disc collection, divided between the band’s years with Roadrunner and Metal Blade.

This compilation of tracks will serve as the ultimate versions of each of these songs. No better version will exist anywhere else and this is the first compilation in which the band has chosen each song. Most of these songs have been played live, or will be played live again soon, so one can think of this as studio versions of King Diamond‘s live set, plus a little extra. And as fans are surely well aware, King Diamond is as synonymous with chilling story telling as they are with top shelf song writing. So, let us peek behind the curtain to see what makes these particular songs worthy of summarizing and exemplifying such a massive and historic catalog of music.