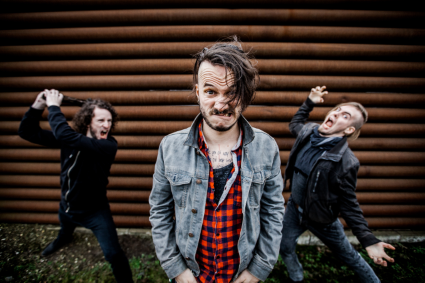 Last Saturday we brought you details of their new album. Today we let you into their mad, mad world

The Hirsch Effekt have realized their philosophical dream of outdoing perimeters and pigeonholing. The band’s musical spectrum, ranging from Hardcore, Chamber Music, Death Metal, Jazz, Electronica, Pop to any other imaginable genre, is being completely deconstructed and woven into an highly individualistic mash-up of its own.

The trio, hailing from Hanover, Germany, seem eerily to embody the musical resonance chamber of the black hole.
The artcore group, consisting of multi-instrumentalists Nils Wittrock (i.a. vocals, guitars), Ilja John Lappin (i.a. bass, vocals) and Moritz Schmidt (drums), plays an extremely variable style of music and combines various elements to the utter peak of sophistication. The end result is nothing less than a homogenous and enormous sound monster, nearly beating your speakers to death. Although the very first impressions coalesce into an epic, aggressive and sinister sound, there is a specific personal touch and a frankness in the German lyrics of Nils Wittrock. They signify authenticity and closeness and stand out as a counterpart to the musical periphery.
The saga begun with their 2010 debut album HOLON:HIBERNO (2010) and continued with the successor HOLON:ANAMNESIS (2012). In 2013, the readers of German alternative magazine VISIONS voted the group’s second album under the 20 best albums of all time. It was the only German album that made it on the list, next to rock and metal classics like Nirvana’s “Nevermind“, Tool’s “Ænima“, The Mars Volta’s “De-Loused In The Comatorium“ or Rage Against The Machine’s self-titled album. Even Math- & Hardcore giants, The Dillinger Escape Plan, got hold of The Hirsch Effekt and took the band on tour, twice in a row.
For the sake of the third studio album, the trio once again collaborated with producers Max Trieder and Tim Tautorat (The Kooks, Manic Street Preachers, In Flames). Recordings were completed in the legendary Hansa Studios and Emil-Berliner-Studios. The album displays the band’s most contrasty work to date, at the same time being their shortest long player. With HOLON:AGNOSIE in their back catalogue, the band’s oeuvre has mutated to the threeheaded Cerberus, the hellhound guarding the entrance to the underworld.
Tourdates: