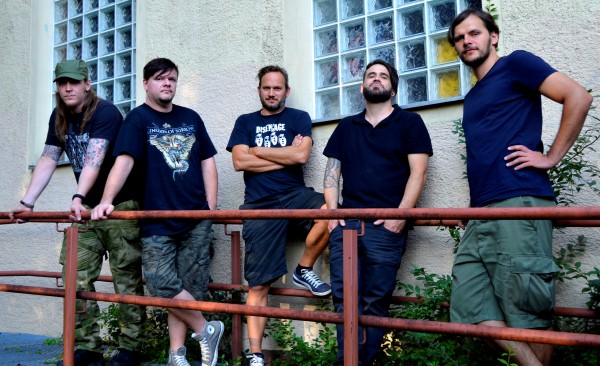 The basement of GRAND MASSIVE was built in Germany by Jochen Boellath (owner of Daredevil Records, ex-Duster69) with his long-time friend Juergen Lobinger (ex-Cursed) in early 2008. The band was completed by long-time Duster 69 friend Toby Brandl (ex-Commander) and Holger Stich (ex-Red Tape Parade). After some collaboration and live-support with Swedish singer John Hermansen (Mother Misery, ex-Awesome Machine, ex-Stonewall Noise Orchestra) in the “Duster69-years”, Jochen asked John´s brother Tony to do the vocals. So…the line-up has been completed and the first EP was recorded in a professional studio as a first Demo.

The Demo got sold out in a few weeks and the band signed a record-deal with DOWNFALL RECORDS (Twilight) Sweden, who released the Demo again as an official EP. The feedback was impressive.

A professional Videoclip has been produced for the song MONSTER It got released on the MAXIMUM METAL DVD at the German METAL HAMMER magazine. The song was on the free-magazine-CD of the legendary TERRORIZER MAGAZINE (UK) too!

Because of the great demand for Vinyl, the band released a limited Split 7“ with Swedish rockers SPARZANZA on Kabuki Records / Universal Sweden.

GRAND MASSIVE played in August 2009 at the legendary WACKEN ROCKS SOUTH Festival on the WET-STAGE with bands like SLAYER, VOLBEAT, IN EXTREMO, EDGUY, DORO, GRAVE DIGGER and many more.

Juergen got replaced on guitar by the ex-Duster 69 drummer Peter Wiesenbacher in 2011.

After the recording of new material and some gig offers, the band decided to replace Tony on vocals to be free for concerts and new recordings. Alex (FROM CONSTANT VISIONS – Bullet Records / Soulfood) joined the band then on vocals.

After a longtime friendship with John Lancaster from CHUM (Huntington / USA) and the endless love for their debut album DEAD TO THE WORLD out on CENTURY MEDIA RECORDS, Jochen asked John for a co-operation. John liked the new GRAND MASSIVE material and did the lyrics and vocals for the song SLEEPWALKER.

GOING INTO RED is a cover-version from Germany`s Stoner Rockers DUSTER 69 and after they split up in 2007 it has been released posthumously on the Split 7“ together with HOUSE OF BROKEN PROMISES (ex-Unida). At that time John Hermansen (Mother Misery, ex-Awesome Machine, ex-Stonewall noise Orchestra) did the lyrics and vocals on GOING INTO RED. The new version of the song is the first official song with Alex on vocals

The band have just released new EP “2” Look out for more news on them on Tuesday.

Check out the first video from the EP here.