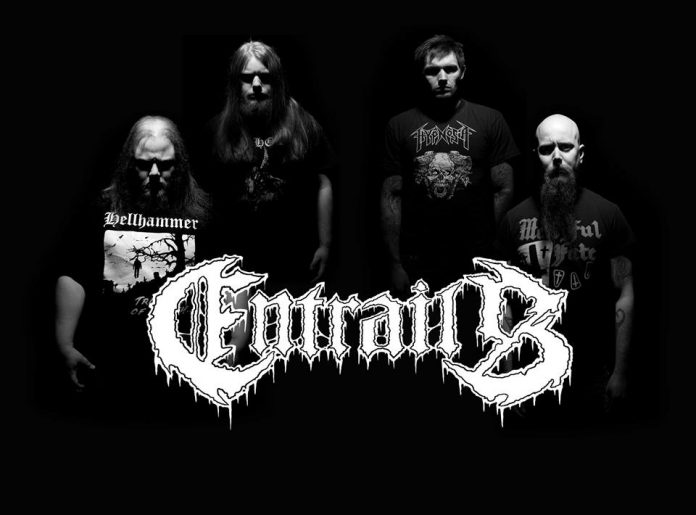 They are masters of Death Metal. They are releasing a new album next month

Boasting members of Birdflesh and General Surgery, ENTRAILS celebrate the teachings of Dismember, Grave, Entombed and Tomas Skogsberg’s Sunlight Studio alumni with a mutinous air raid of buzzsaw riffs, bestial vocal tirades, earth-rumbling rhythms and repugnant tales of suffering, doom and the undead with the expert brutality of their forefathers. The band was initially forged in 1990 by Lundqvist but disbanded prematurely due to his dissatisfaction with their initial demo recordings. Half the lineup went their separate ways while Lundqvist continued to write music until 1998, when ENTRAILS officially went dormant. It would be a full decade before the band would ascend from the grave when Lundqvist found the band’s early recordings in an old tape collection and decided they deserved to be released as they should have been originally. With modern recording technology, the first two ENTRAILS demos — Reborn and Human Decay — finally took shape.

The band unleashed their menacing Tales From The Morgue debut in June of 2010. The album featured songs from both newly recorded demos and was mixed and mastered by Dan Swanö. 2011’s delightfully repugnant The Tomb Awaits full-length would follow. The record reaped critical adoration from metallers and media outlets both stateside and abroad with No Clean Singing noting, “although massive distortion is (of corpse) the name of this game, Lundqvist enhances the morbid fascination of the music with near-clean, Dismember-ish, reverberating guitar solos that alternately slither, writhe, and moan seductively. Indeed, all of the multi-faceted guitar tones and riffing techniques on this album, and the way in which they’re balanced in the mix with the gut-punching bass and the drum-kit attack, are near-textbook representations of how this genre of music should sound.”

ENTRAILS joined the Metal Blade Records roster in March of 2012, leveling the stages of numerous festivals throughout Europe (Party.San, Summer Breeze etc.) that Summer before composing 2013’s ravenous Raging Death full-length. It was then that Lundqvist moved his studio into the woodshed where it all began in the ’90s. The new/old surrounding inspired Lundqvist to write material like never before. Released later that year, The New Noise crowned the record, “an absolutely perfect slab of catchy, violent Swedish death metal,” while Stereogum commended it for being, “perfect for blasting, banging, and bashing.” Added All Music, “What comes through right away is the guitar tone, with its perfect blend of thickness and crunch feeling like a portal to the days when the fat distortion that was the backbone of Swedish death metal was (and perhaps still is) the heaviest thing to come out of an amp. Immediately afterwards you’re hit by just how punishing the album is. These songs aren’t here to dazzle you with their speed or virtuosity. Instead, they offer up the fat slabs of classic riffage that seek only to crush the listener under their immense weight, bringing a muscularity to the table that’s hard to fake.”

Dubbed “one of the more vital and warranted demo collections to be made available” by Metal Injection in an 8/10 review, ENTRAILS dropped Resurrected From The Grave  Demo Collection last summer. The eighteen-track collection delivers the band’s Reborn and Human Decay recordings  the now infamous demos that started it all in one venomous helping. And now comes the time for a new chapter in extremity with the audio disease of Obliteration.

Obliteration will see release via Metal Blade Record on May 15, 2015. For preorder bundles, visit metalblade.com/entrails.