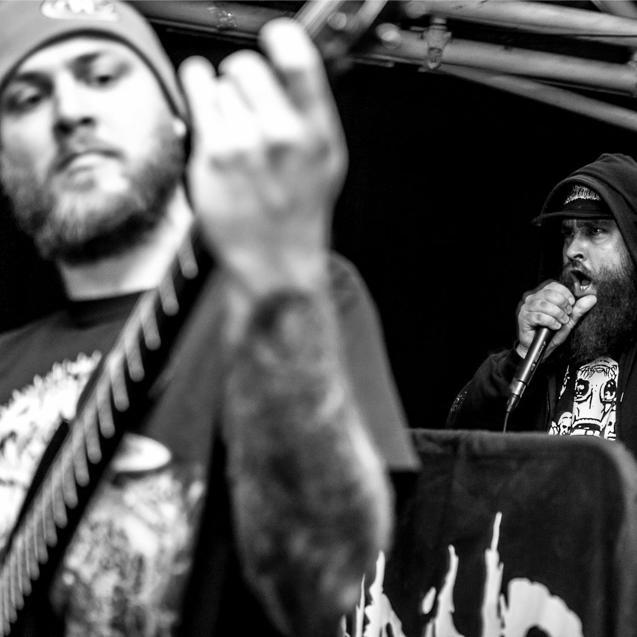 New album is out. Here’s the history

Starting out in Hamilton Ontario Canada in 2007 with a Blackened Death Metal sound in mind, vocalist stability plagued the band. Playing countless shows with numerous vocalists “trying out”, creating music wasn’t the issue; finding a front man was.

2008 brought in new members with a “deathcore” influence which sparked chemistry among the others and new music continued to be made. Still looking for that front man, one to really set the band apart. Talks swirled of someone the new members knew and had jammed with in previous bands. As everything came together, music and member line up; it was time for Ending Tyranny to take off.

2010 was a milestone for the band. After 2 years of writing and playing deathcore that was eaten up by southern Ontario, a name had been branded. Thought of as “The heaviest band in Ontario” and “Having the most in common with the Montreal Deathcore scene” at one point, a scene that the band held in highest regard. An EP was made, something that was of true blood, sweat and tears. “Remnants Of The Aftermath” was recorded and released independently leading the band to be local support for bands like Ion Dissonance, Fuck The Facts, Waking The Cadaver & The Holly Springs Disaster. Eventually the year lead to the departure of the last original member, a new drummer was brought in and the onslaught continued.

2013 ended on a high note, signing on with Ghost Vision Records, a local independent record label started by a friend. The last 3 years have lead to success that the members couldn’t have imagined. Shortly after the drummer change in 2010 a 2nd guitarist was added to the band, a change that was highly anticipated by many. The new addition boosted the band from a “Deathcore” status to a “Brutal Technical Deathcore” brand of music. After recording at Ice House Studios in Goderich Ont, “Perpetual Greed” came to life, a staple of their work. It was years in the making and came together in such short time, but got great praise; “Breakdowns so catchy you’d think you were playing baseball”. Continuing to be local opening support for influence bands like ” King Conquer, Suffokate, Arsonists Get All The Girls, Cryptopsy and even heavy weights like Dying Fetus. 2015 looks promising as the band works towards releasing their new album ‘Evolution of Deceit’, releasing a new music video and playing shows in new cities.