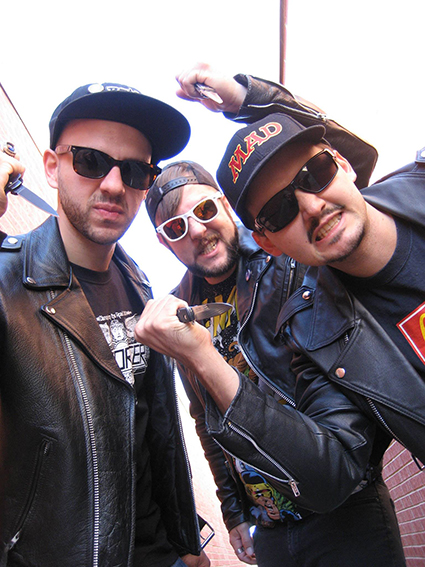 Texas thrashers are here to take no prisoners….
Bran Damage. Trey Lunabomber. Napaulm. Three maniacs on a mission to resurrect the dead by mutating the early sounds of Heavy Metal, Punk Rock, and Thrash! Rising from the gutters of Grand Prairie, TX in June 2007, together they are ELECTRIC VENGEANCE – an uncompromising trio of madcaps possessed by their demigod Electric Harry to avenge these commercially-raped genres, left for dead by the mainstream.
United to thrash with Bran Damage’s guiterrorizing shred-work and harsh lead vocals, Trey Lunabomber’s maniacal beats, and Napaulm’s merciless bass stranglings, ELECTRIC VENGEANCE will smash your skull through your socks with their signature style, STREET METAL – a pissed off combination of Punk Rock, Thrash Metal, and New Wave of British Heavy Metal with a healthy mix of attitude and offbeat humor to satisfy the rabid hunger of their ever-growing underground cult – affectionately known as the STREET METAL ATTACK! Keep It Electric!