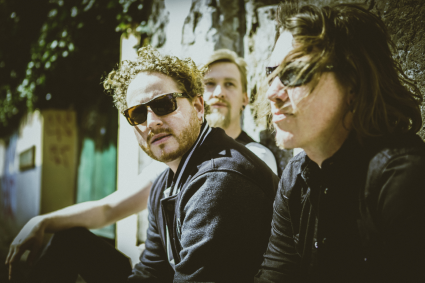 EAT THE GUN up the ante

In August 2015 the band will release studio album No. 5 and will once again collaborate with label partnerSteamhammer/SPV. The musical reorientation on the 2013 release Stripped To The Bone was game-changing for Eat The Gun and rewarded by the European music press with tremendous praise of album and band. Starting 2015 the band was literally living in the studio, working nonstop to finish the songs for the much anticipated new album. Band and label were once again able to bring in Stephan ‘Gudze‘ Hinz (H-Blockx) as producer, who already in 2013 helped the band redefine their sound. One thing’s for sure: captivating modern Alternative Rock, great songs and amazing live performances are on the menu for 2015. There isn’t just one place for good music, Howlinwood is everywhere.

“Stripped To The Bone was a liberation for us as a band and completely changed the way we write and record songs, maybe even our entire approach on how to make music. Back then we suddenly realized what kind of music we always wanted to make and this is what the new album is about, taking something that feels good and develop it into something even better.‘ Hendrik

Over the next weeks band and label will announce the album title, artwork and present the first listening material, followed by single and video releases before the final album release end of August. The first tour dates in 2015 are already confirmed.

Eat The Gun got together in 2002, have released the studio albums Cross Your Fingers (2006), Super Pursuit Mode Aggressive Thrash Distortion (2009), RUNNER (2011) and Stripped To The Bone (2013). The band is a permanent resident in the German Rock/Alternative radio and DJ charts and even made it to the top 20 of the American college radio charts in 2011. The band has played more than 600 concerts to date, inspiring fans at Open Flair Festival, Summer Breeze, Bochum Total, Taubertal Festival, Big Day Out and Wacken, appearing alongside acts such as Die Toten Hosen, HIM, Danko Jones, Duff McKagan, Donots, Mustasch, Backyard Babies and Hardcore Superstar.