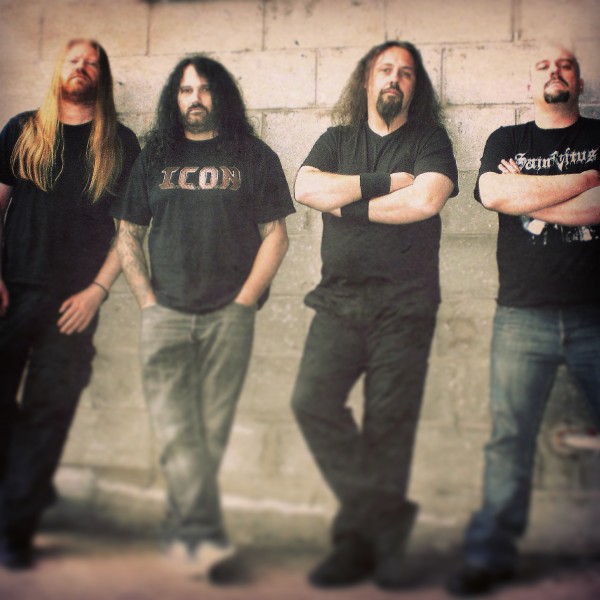 There can’t be many bands that would hump all their equipment on a train from Lancashire to London, enduring an entertaining trip on the packed underground to boot – just to do a gig.

Because that’s what the boys did in an effort to bring their noise to a new audience.

From their very beginning, say the band,  I.C.O.N has been a group out to prove any doubters wrong, and one which has strived forward, taking on and breaking down any barriers at any cost…

And if you don’t already know, you can check out what the fuss is about on their new live EP “New Born Live,” released on the Burning Halo label, and I.C.O.N can be summed up thus: “For sure, there is a display of great metal music that fires up a baying audience, but there is also a performance from a band determined to make their mark; a grit and an attitude to entertain, to give the audience a show. It’s raw, it’s in your face, it’s real, no pretence here, it’s metal, how it should be played and performed, and let’s not forget the most important of factors this band deliver – great songs that get into every fans blood.”

“New Born Live” is a short sharp shock from a band that were really on fire when this live set was recorded at 2013’s Out Of The Ashes, Ellesmere Port, UK.

This live recording celebrates the band’s successful three year period of touring their debut album which saw them tour all corners of the UK and included two European trips taking in shows in Belgium, Germany and Holland. A quick total shows the “New Born Lie On The Road” tour came close to 200 shows, a fine achievement for an unsigned band at that time. It was a tour that saw many highlights including support shows with the likes of Diamond Head, Blaze Bayley, Warrior Soul, and what many saw as a show stealing performance at the 2013 SOS Festival in Radcliffe, Greater Manchester. MVM saw them support Rouge Male on this mammoth trek and is absolutely delighted that the boys are back in the studio.

I.C.O.N now includes Larry Paterson, ex of Blaze Bayley’s band, all round nice guy, author  and historian. Larry has been documenting the recording of the album on the bands Facebook page – with often hilarious results. For example, at one rehearsal Larry recounted the tale of of how he set off north for the 100 odd mile journey to the studio, only to forget his cymbals…..!

MVM is reliably informed by our spies in the camp, though, that the new album is shaping up rather well.