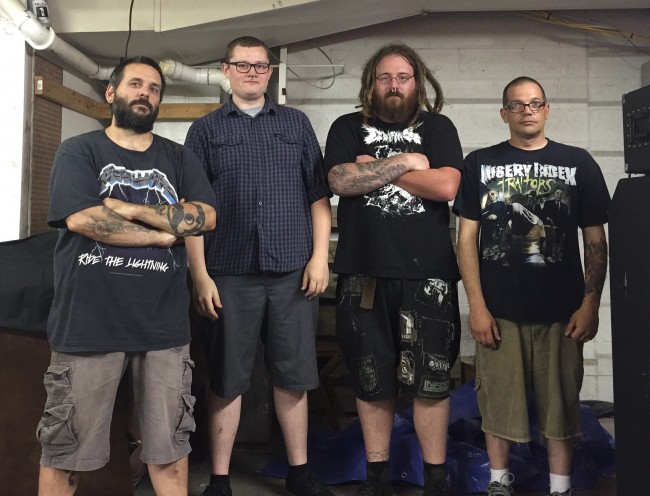 Meet the deathly doomsters who have other agendas too

Bittered was formed by Paul Folk and Dennis Matos in 2014 in York PA, the object was just to create shit they like to hear in its dirtiest and heaviest of forms. Paul Folk is founder and longtime guitarist for the MD death metal Exterminance (see www.metal-archives.com/bands/Exterminance/22912  for more info.).

Paul also has founded and played in many other bands including 2 with Drummer Dennis Matos and they were QIM (1/4 Inch Microbomb) BaltimoreMD  based metal punk band and Antiaudio – Baltimore MD based grind metal. Paul and Dennis moved up the road to York PA a few years back. Paul Folk also currently plays with Bittered vocalist Kasey Harrison in the York PA based political grind band Police State (www.facebook.com/Policesstate717 ) for Police State album listening on bandcamp go here (policestate717.bandcamp.com)   .

Lyric themes are Political in nature and offensive to some, Vocalist Kasey Harrison truly puts emotion back into the music, angry, pissed, and absolutely disgusted about where the world has been headed. Hopefully some eyes will open.

After a few Months of jamming and recorded tracks they hooked up with VA based Metal label Lost Apparitions Records (www.lostapparitionsrecords.com)  who signed them up to release their debut album “Hubris Aggression”.