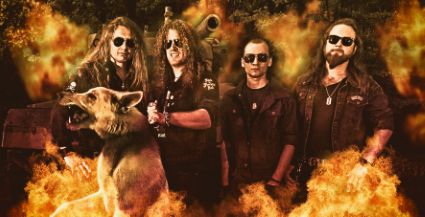 German punk n rollers with an album due this month

There are albums with titles that leave little doubt about their musical direction. Appetite For Erection sounds like … well? … you’ve got it: like pure rock ’n’ roll with an ass-kicking attitude and an irrepressible sense of humour. Classic rock music that’s fun and goes directly into your leg and neck muscles, with provocative lyrics which fully live up to the inherent mission of this musical genre. The self-appointed ambassadors of uncompromising and diverse power rock call themselves AC Angry, hail from Saarbrücken and are ready to present their second album on Steamhammer/SPV. Four musicians, one philosophy: kick ass! “We were absolutely happy with our debut Black Denim, but we knew we could do better and top it with our second release,” vocalist/guitarist Alan Costa reckons, obviously proud of the band’s latest achievement. “You can tell that we toured a lot in the past three years and the energy and experience from countless concerts have influenced our songwriting.” Appetite For Erection is scheduled for release on 25 November 2016, without doubt a red-letter day for all aficionados of handmade rock’n’roll!

Since Alan Costa, Dennis Kirsch (bass), Stefan Kuhn (guitars) and their current drummer Norman Steisslinger – who joined the group to replaceSascha Waack after Sascha had to leave due to time constraints once the studio recordings had been completed – now operate under a new name, their sound has assumed a clearer shape, which makes it even more unique. 2011 saw the musicians change their band name from the previous logo of ´Taletellers` to their current moniker of ´AC Angry`, leaving behind an impressive record of two albums and one EP and going on to go the whole hog: their 2013 debut Black Denim was greeted with great interest by fans and media alike. The album went straight to no. 1 of the Amazon download chart and provided the basis for celebrated concerts with Saxon, Airbourne and Black Label Society, among others. Appetite For Erection is the second chapter in AC Angry’s promising career, proving their absolute determination to continue to grow artistically and face new challenges.

One of those challenges is their hookline appeal: “The target was clear,” Costa explains. “We wanted our songs to sound straightforward but catchy, haunting yet delivered just right so that people can sing along to them. If that’s what they want to do.” That’s one question AC Angry don’t need to worry about because once the opener ´I Hate AC Angry` really gets down to business and the gritty vocals on ´I Want To Hurt Somebody` practically jump at you, melody and lyrics roll off the listener’s tongue easily at the very latest after the second chorus. Which is what happened during their most recent tour when ´I Want To Hurt Somebody` made its way onto their setlist even before its release, inspiring the audience to join in loudly. The programmatic ´Testosterone`, which AC Angry composed in the studio in no time during the recordings of Appetite For Erection, is likely to have the same effect. “That kind of approach is pretty unusual for us,” Costa confesses, “but the song gains so much momentum and is so awesome that it just seemed to pour out of us.”

But there’s another side to Appetite For Erection, which also features numbers with a lot of depth and a slightly slower groove. One of them is called ´No Way To Go But Down`, based on an acoustic guitar verse and lyrics which uncover various bitter realities. Costa: “The title has no sexual connotations but refers to situations in which you are tempted, go under, lose. Definitely no fun track.” ´Son Of A Motherfucker`s Son`, which also features an acoustic guitar, is also 100% rock ´n` roll despite being less tough.

And last but not least: Appetite For Erection was produced by Phil Hillen (Powerwolf, among others) at the SU2 studio in Saarwellingen. Guest musician James Boyle of AC Angry’s friends Honey Creek contributed a memorable harmonica solo on ´I Hate AC Angry`. These are the facts, now turn the controls to ten and let your auditory nerves be bowled over. Talking of which: looking at the cover artwork, the band appears to be eager to … well … bowl over more than just auditory nerves. But that’s another story altogether.