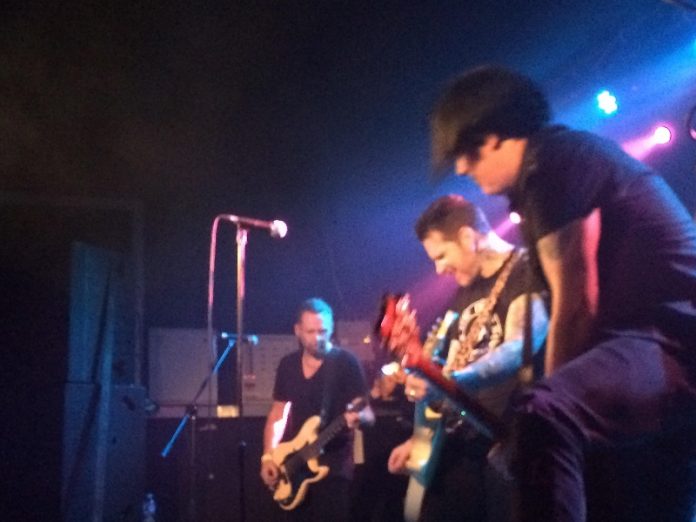 Appropriately perhaps Vice Squad, who have been at it in one guise or another since 1978, are about to launch into a song called “Punk Rocker” when it happens. “I’m sorry,” says Beki Bondage, “we seem to be having some technical problems.” Guitarist Paul disagrees. “Nah I am  just pissed,” he grins. “I call that no problem at all….” Vice Squad are every bit as dangerous and snotty as punk rock should be. Newer stuff like “If I Knew What I Know Now” rockets along like Motorhead would if they had really gone down the punk route, while classic stuff like “Latex Lover” (dedicated to the “old perverts” in the house) stands up to the test of time. Beki herself is a fine focal point, donning her bowler hat for “Ordinary Girl” and generally acting like a Ringmaster in the circus of debauchery for the rest of a set that passes by in a blur. “Punk Police” is vitriolic, “Sniffin’ Glue” is iconic and the audience response to “Last Rockers” is good enough to give Beki “four stiffies”. It’s probably best not to ask…..

It probably had to happen sooner or later. Ricky Warwick and The Fighting Hearts are halfway through the first verse of an emotional “Schwaben Redoubt” (a song about two Irish lads from different sides of the religious divide who lost their lives in the Somme) when the singer forgets the words. He grins, asks the audience for help, looks in desperation for an auto-cue and says “I’m in so many fucking bands……”

And, to keep things simple he plays songs from all of them tonight.

Along with a couple of surprises, because MV (and very possibly everyone else) probably wasn’t expecting “Eyeball Kicks” from the (Sic) project he was briefly in post Almighty, but that’s here too, all in an hour and twenty minutes that is just about as thrilling as you could wish to see.

Heavy on both songs from this year’s solo stuff, the set is packed full of The Almighty too, and “Do You Understand” is a brilliant opener, while unfortunately “All Sussed Out” is more relevant today than when he wrote it – especially given what America did this week.

Great tracks from them are tossed out one after the other without a care in the world, and Warwick is clearly loving the time on stage. “Celebrating Sinking” is a glorious singalong, “The Road To Damascus Street” not far behind,  and “Johnny Ringo’s Last Ride” has all the hallmarks of something Ginger Wildheart was involved in.

One of the highlights elsewhere is the title track of his comeback solo album “Tattos And Alibis”. It remains perhaps his most underrated song. The heavier version of it tonight takes it to another level, while the bouncing up and down during The Almighty’s classic “Wrench” takes everyone back a couple of decades. That said, there are more young people here than there might have been a few years back too.

No encore’s – perhaps Warwick is too blue collar to allow himself such rock star trappings away from Black Star Riders – nevertheless the end of the set is akin to an open top bus ride of celebration. “Finest Hour” is the only BSR song played, but its a belter, “Jailbreak” sees Beki Bondage stand by MV playing air guitar and headbanging – she’s not the only one. Then there’s the small matter of “Free N Easy” and “Jonestown Mind” which closes the set. Two of the finest songs of all time, its these and many, many more that prove Ricky Warwick deserves what amounts to this second chance he’s had in the last 10 years or so.

Yet looking at him here, watching the fun he’s evidently having with Thwaite in particular, but with this band in general, you sense he’s grateful too. There’s a feeling with which he thanks everyone for coming that suggests it is – like the man himself – anything but fake.

A brilliant first night of the tour. Now to find an auto-cue before tomorrow.