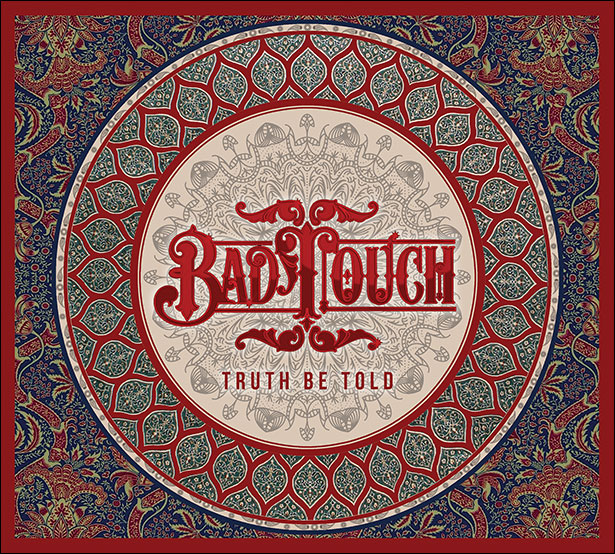 Over the last few years, the words “with Special Guests Bad Touch” have been a welcome – and frequent – sight. The band, who have an old-school sound, have done it in a throwback way too. Steadily building up a fanbase by getting out and supporting just about everybody from The Quireboys to Bonafide to Kentucky Headhunters and impressing everybody while they’ve been doing it.

Considering it took them five years to get their debut full length record out, it comes as something of a welcome surprise that album number two arrives just a year later – and even better is the fact that it is a copper bottomed, shiny belter of a thing.

Going to Wales, evidently bursting ideas – notably “Truth Be Told” is self-produced, evidence that this is a single minded outfit who know exactly what they are trying to achieve – the result is a 12-track collection that is so good that it has the potential to take them into places that they’ve only dreamed of so far.

“One More Night”, the strident thing with which they kick off, merely re-enforces the idea that we are dealing with a British Black Crowes , it’s tale of unrequited love would sit alongside “Remedy” in most agreeable fashion.

The fact is though, that it – and everything else here frankly – has to admit that “99%” is the highlight here. Remixed for Radio for the legendary Chris Kimsey, it has everything needed to sell by the bucketload – if it doesn’t then the record buying public of the world deserves a collective kick in the nutsack.

That said, largely throughout the record you can pick out something brilliant. “Waiting For This” is a huge sounding thing that presumably knows it sounds like Led Zep and couldn’t give two shits, similarly “Under My Skin” is a throbbing thing with a fine chorus, and if “Heartbreaker Soulshaker” is as frivolous as its hedonistic subject matter, then at least it has a decent groove and funky bassline.

If that might be the only one that isn’t absolutely top class, then the same can’t be said for the bluesy “Take Your Time” or the uplifting couple of minutes that is “Let The Sun Shine” which finds singer Stevie in full on Chris Robinson mode.

Indeed, when they get cracking and really let their hair down, there are few bands who can better what Bad Touch do here “My Mother Told Me” is the most personal affair here, possibly, but it is one of the best too, and if the subject of “Outlaw” has been done a million times before, from Bon Jovi’s “Wanted (Dead Or Alive)” and so many others, then its latter day Skynyrd stylings are still superb.

Elsewhere, “Made To Break” – another remixed by Kimsey – is surely designed to be played live, “Healing Hand” locks into a riff and stays there for fun, and the countrified closer “The Mountain” is both mighty and mightily evocative. In the build up the record Westwood has said that it’s one of his favourite songs – it is easy to see why.

When you hear “Truth Be Told” you will no doubt have your own thoughts as to which one is best – and there’s enough to choose from. Bad Touch have made the record you hoped they would. One that is a match for their brilliant live shows.

The Special Guests are now special themselves, and will no doubt be headliners soon.