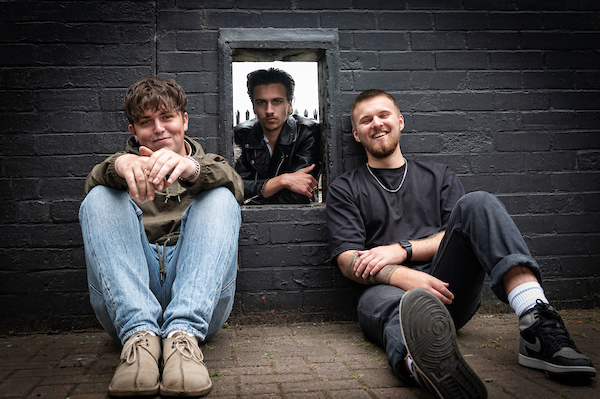 Signing to the Run On imprint, Glasgow’s favourite Rock’n’Roll underdogs will be releasing ‘EP1‘ on the 26th of November. Comprising four tracks of their patently gutsy indie rock, the trio precede the release with current single: “The Fear (Is Out To Get Us)“.

Fittingly in-time for the Halloween season, “The Fear…” finds the band ruminating on that most horrifying of all sensations… the hangover.  As Robert Lang of Dogtooth says:

“We knew what we wanted and what the song was about, the dread of waking up with a hangover, slowly remembering what you had been up to over the weekend with your mates, known as “The Fear”.”

Custom-built with an underlying sense of paranoia that steadily creeps into consciousness, it’s an anthemic cut that will hook, haunt, and haul you in with its foreboding gravitational pull.

Produced with the assistance of Jamie Holmes (Gerry Cinnamon, Declan Welsh & The Decadent West) and Babystrange frontman and producer Johnny Madden, “The Fear..” paves the way for a release full of thrills and spills aplenty when ‘EP1‘ lands next month. Amongst its tracklisting, other cuts include the full-throttle opener, and next single release, “All I See Is Grey“, a song about breaking-up and bouncing back (also co-written with Johnny Madden); the darkly funky “Served My Time“, which finds a band preoccupied with peer-pressures and wrong paths; as well as the epic, electronic-skewered closer: “Don’t Know Why“.

The oldest of the tracks featured on ‘EP1’, “Don’t Know Why“, was written around 4 years ago, beginning life as a studio jam before morphing into something altogether grander. Refined over years of pedantic polish and finesse, it eventually found its current enlivening form.

“We kept going back to this one” says Lang of the band, “we took a bit of time writing the lyrics and it’s about a guy who finds himself moving away from his hometown after letting down all the people he cares about.”

Re-mixed and re-mastered for the EP, it closes out a suite of songs that showcase the Scottish band in firm control of their art and taking confident steps towards their wildest rock’n’roll dreams.

Together since their early teens, Dogtooth are made up of John Hewitson– lead guitar and vocals, Craig Morrison – Bass Guitar and Robert Lang – Drums and backing vocals. Clocking-up over 400 gigs across the country to date, the trio have been long-established favourites in their native Glasgow, with memorable appearances at hallowed venues like The Barrowlands in Glasgow to The Cavern in Liverpool. With word steadily spreading across the wider nation, singles like “Rebel”, “You Could Be Mine” and “Get In Get Out” have earned the band thousands of Spotify plays to date and a cult-following that burgeons with each new release.

Recently signing to Run On Records/Modern Sky UK, the lads have just released “The Fear (Is Out To Get Us)” and put in an exhilarating live set at Sound City festival as part of a showcase show for their new label. Looking to recapture the magic in front of a hometown crowd, Dogtooth are now sizing up their first Glasgow appearance in almost 2 years at Nice N Sleazy’s, Glasgow on Thursday 28th October, with the band set to show-off their latest studio works.

Expect a wealth of new music and live dates from Dogtooth across Scotland and beyond in the coming months. Stay tuned.