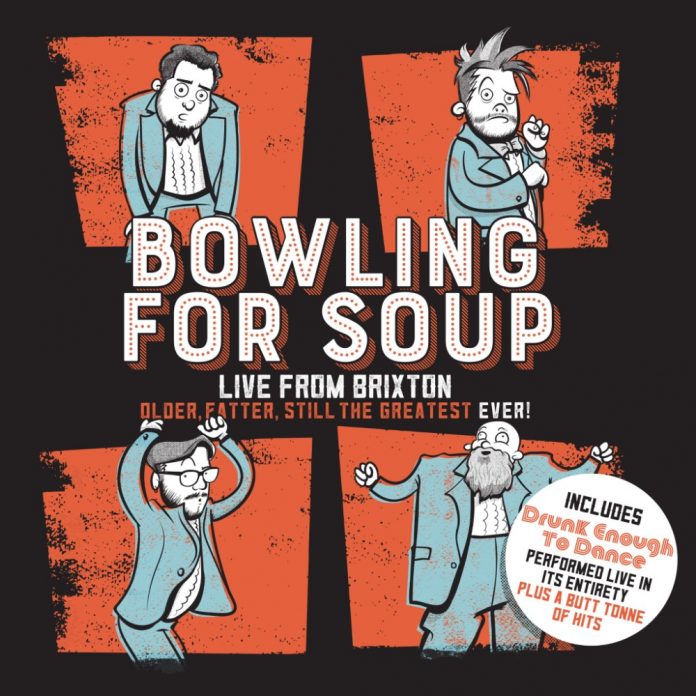 In a world full of turmoil, Bowling For Soup have once again proven they are a wonderful antidote to problems of all shapes and sizes. The recording of the biggest night of their career, captured as the live album and live DVD “Older, Fatter, Still The Greatest Ever – Live From Brixton” is designed to put a smile on the faces of those listening and watching no matter what else may be going on in life.

Released on the 18th of January, Older, Fatter, Still The Greatest Ever captures Bowling For Soup at their very best, performing their breakthrough album Drunk Enough To Dance in full. That’s not all, as the album is mixed in with an assortment of their other biggest hits like High School Never Ends, Almost, 1985 and of course, Today Is Gonna Be A Great Day (the theme to Phineas and Ferb). With huge levels of crowd involvement and all the humour one has come to expect and love from a Bowling For Soup concert over the years, Older, Fatter, Still The Greatest Ever allows BFS fans old and new to take the band’s live experience with them wherever they go.

A reminder of the full tracklisting for the album and DVD can be found below. Older, Fatter, Still The Greatest Ever – Live From Brixton can be ordered at the following location – https://greatestever.bowlingforsoup.com/.

Older, Fatter, Still The Greatest Ever – Live From Brixton Tracklisting:

2 I Don’t Wanna Rock
3 Emily
4 Girl All The Bad Guys Want
5 On And On (About You)
6 Surf Colorado
7 Almost
8 Life After Lisa
9 Where To Begin
10 The Last Rock Show
11 Punk Rock 101
12 Self-Centered
13 The Hard Way
14 The Bitch Song
15 Out The Window
16 Cold Shower Tuesdays
17 Today Is Gonna Be A Great Day (Theme Song To Phineas and Ferb)
18 Running From Your Dad
19 High School Never Ends
20 Scaring Myself
21 Greatest Day
22 Ohio (Come Back To Texas)
23 Star Song
24 1985
Older, Fatter, Still The Greatest Ever – Live From Brixton is also available to be streamed on Spotify, which you can do right here.
Bowling For Soup were recently announced to return to Reading and Leeds Festivals for the first time in sixteen years. They’ll be lining up alongside headliners The 1975, Twenty One Pilots, Post Malone and Foo Fighters, with Bowling For Soup playing on the same day as The 1975 (exact stage and slot to be confirmed). Here’s what BFS main man Jaret Reddick had to say about their Reading and Leeds return:
“Back to where it all began for us in the U.K. I’ll never forget driving up to that festival and wondering “how the heck I ended up in this place.” The tent was packed. People recognized us watching Slipknot and Blink 182…it was the beginning of an amazing relationship with the U.K. and here we are again. Reading and Leeds!!! I can’t tell you how excited we are to be back! I promise we will make it a weekend not to forget!”
Bowling For Soup:Jaret Reddick
Guitar and vocals
Chris Burney
Guitar
Erik Chandler
Bass and backing vocals
Gary Wiseman
Drummer
Find Bowling For Soup online: