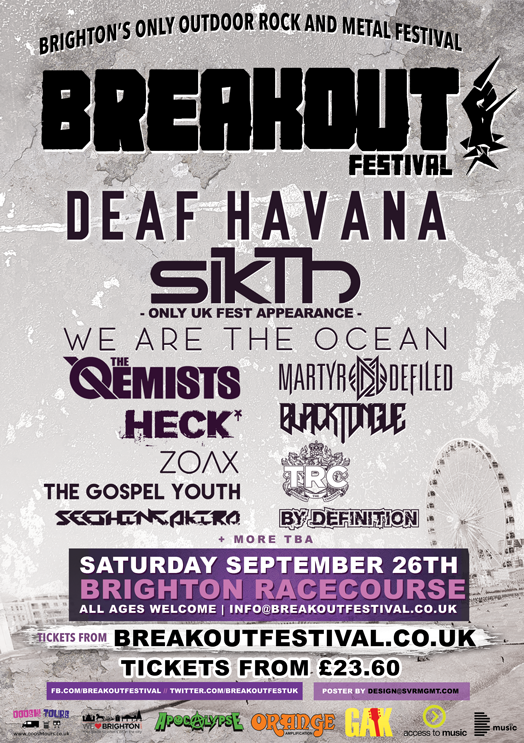 Course you do! Here’s how

Breakout Festival are teaming up with BBC Introducing: The South to bring local rock and metal bands more opportunities to get into this year’s explosive festival line-up.

With just over one month to go until the festival gates open, organisers have joined forces with the best UK source of emerging talent to pick one band to open Breakout Festival 2015. The chosen band or artist will open the show alongside Black Tongue, Heck, Martyr Defiled, The Qemists, We Are The Ocean, SikTh and Deaf Havana.

Up and coming bands can join BBC Introducing: The South at www.bbc.co.uk/introducing where they can upload tracks for inclusion. Until 31st August, BBC Introducing and the Breakout Festival team will be listening to local applicants and making their choice on festival opener as we get closer to the event.

Don’t miss out on this amazing opportunity! Apply now at www.bbc.co.uk/introducing

Breakout is Brighton’s first and only outdoor heavy rock festival. It returns to Brighton racecourse on the 26th September 2015 with a high profile line-up which includes Deaf Havana, SikTh, We Are The Ocean, The Qemists, Martyr Defiled and Heck. Last year’s bill included Skindred, Funeral For A Friend, The Blackout, Silent Screams and Betraying The Martyrs. The festival attracted over 2,200 fans in its first year.

2014 HIGHLIGHTS VIDEO: re-live last year courtesy of Bmusic, featuring clips from the almighty Skindred (official), Silent Screams, The Qemists, Fathoms and InMe. Miss it all? Well here’s a little taste of what you can expect in less than  5 weeks –https://www.facebook.com/breakoutfestival/videos/vb.243894359135823/398811400310784/?type=2&theater

Grab your ticket NOW, available from just £23.60, for your last festival summer blow out in Brighton @http://bit.ly/1P5uJSS