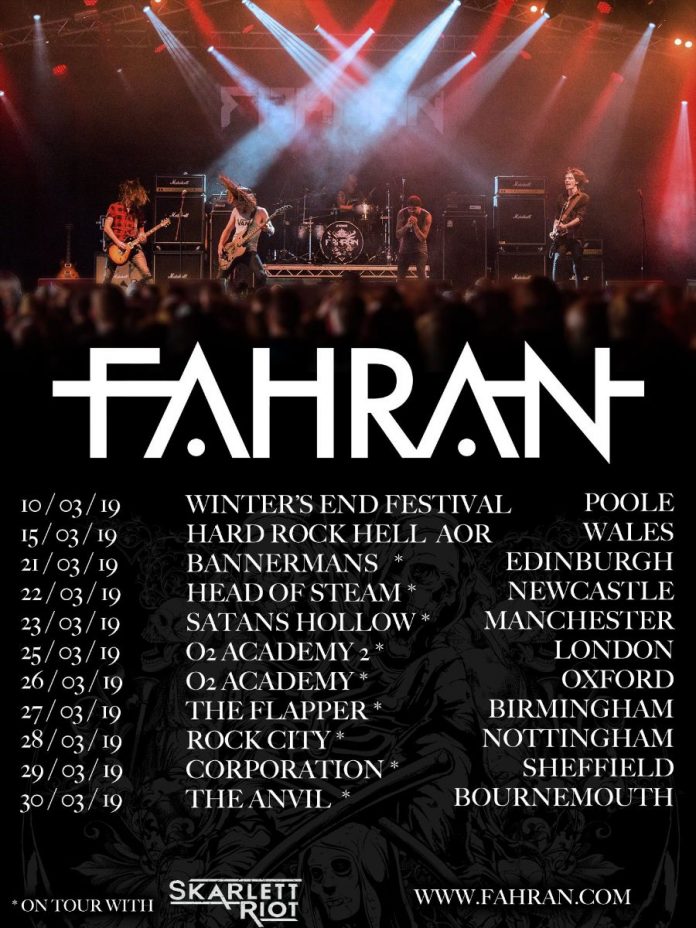 Nottingham’s hard rock / alternative metal 5-piece, FAHRAN, head out for a live run across the UK in March that will include festival appearances at Planet Rock’s Winters End and HRH AOR before heading out as special guests to Skarlett Riot.

The tour will see the band flexing its musical muscle, playing new songs that form the backbone to their next album, slated for release this Summer 2019.

Singer, Matt Black, said, “Last November we decided to try our first headline tour after spending most of the last 4 years on the road as a supporting act and now we’re hungry for more live shows, so we were delighted when our friends in Skarlett Riot invited us to join them throughout March.

We will be bringing our usual high energy show with new, hard hitting music, playing songs from our forthcoming album, as well as some from our previous album, Chasing Hours.”

Ticket links can be found at: www.fahran.com

Fahran (Fa-Ran) are a hard rock / alternative metal 5-piece from Nottingham, England whose members also have connections with Yorkshire and Shropshire.

Formed in 2012 they have a critically acclaimed album under their belts, Chasing Hours (2014), and are on the cusp of releasing a new self-produced album this summer.

They have graced many high-profile festivals, including Download, Bloodstock & Hard Rock Hell and also played alongside the likes of Young Guns, UFO, Black Peaks and many more.