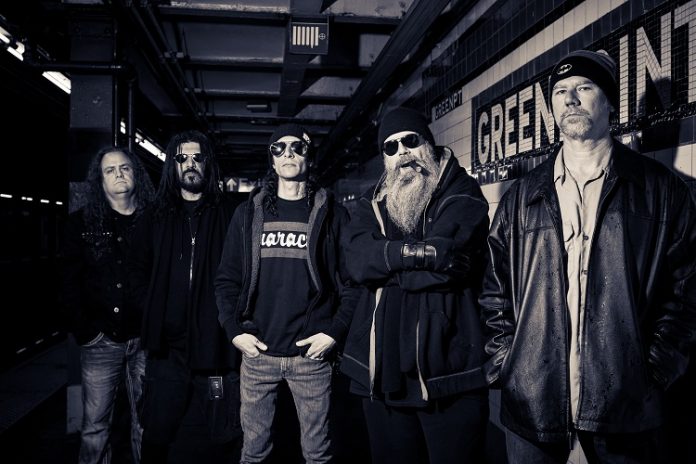 After 27 years of waiting, fans can rejoice as New Orleans’ face-melting thrash legends EXHORDER will be releasing their forever-awaited third studio album later this year. The band has officially wrapped up the recording of their first record since the long celebrated ’92 classic The Law.

Commenting on the long journey towards recording their third album, the band’s founding guitarist Vinnie La Bella stated, “27 years? Man, that’s a big number! A lot has transpired over the course of such an extended amount of time, and this record touches on it all. There is material on this record that is literally 27 years old along with material that was written just 6 months ago, and everything in between. There are truly no words to express the emotions which are connected with this moment. And that’s pretty convenient because I prefer to do my talking in the ring/stage anyway. But the people who really made this what it is cannot go without mention: my incredible band mates; Simon and krewe at AISA Management; all at Nuclear Blast Records; and Duane Simoneaux at OCD Recording, Jens Bogren was an unquestionable genius! So honoured to have him on this. This is, without a doubt for the first time in our career, the album we intended to give you. Production, sound, art, it’s all there with no compromise! I’m eternally grateful for all who helped make it happen. And to all that have waited for it, prayed for it, begged for it, or even dreaded this moment, much love and I’ll see you in the ‘Ring!'”

EXHORDER‘s enduring legacy began in the mid-80’s when they defined the sound of Louisiana thrash and groove metal. Their initial formation was short lived, lasting nearly a decade with two critically acclaimed, classic albums, but their impact on the metal genre can be felt through a generation of bands that followed. EXHORDER dissolved in the mid-90’s but briefly reunited in 2011. Now, the band has returned to reclaim their throne of NOLA metal with their awaited new album and an all-star line-up that includes Kyle Thomas (founding vocalist; TROUBLE, HEAVY AS TEXAS), Vinnie La Bella (founding guitarist), Marzi Montazeri (guitarist; ex-SUPERJOINT RITUAL, ex-PHIL ANSELMO & THE ILLEGALS, HEAVY AS TEXAS), Jason VieBrooks (bassist since 2011; HEATHEN, GRIP INC.) and Sasha Horn (drummer; FORBIDDEN).

EXHORDER will celebrate their return with festival dates in Europe and a North American tour with KATAKLYSM in September. Dates are coming soon.