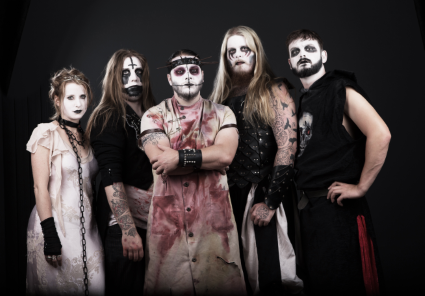 No one can get a festival crowd rocking like these guys. They are doing it all over again

After their triumphant & hugely fun Download Festival performance in what was an insanely packed-out tent, EVIL SCARECROW are delighted to confirm some new show dates – all posters are attached.

They’re are now confirmed as headliners for a second MacMillan Fest show, which is the first MacMillan Festival ever to be held at Thekla in Bristol on September 26th. With the Nottingham MacMillan Fest on the 5th September, Evil Scarecrow are really happy to be able to support this foundation at both shows and are looking to get as much promotion as possible for these great events.

Along with Nazareth, ELP’s Legacy, Uli Jon Roth, Wolfsbane and many more, they will be playing the Legends Of Rock, The Originals at Great Yarmouth, 16 -19th October, which is guaranteed to be a blast!

They are also supporting Wednesday 13 at the Garage in London on Oct 30th & 31st . To keep in sync
with Wednesday 13, they’ll be playing different sets both nights; their Sci Fi set on the Friday 30th (tickets selling fast for this one) and their Spooky set on Halloween night, Saturday 31st (which is now Sold Out)