EVERYTHING BUT THE FUSE 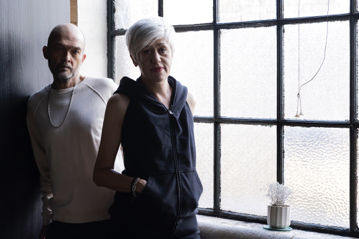 Everything But The Girl have today confirmed details ofFuse, their first new studio album in over 24 years, out on 21st April.

The first single – and opening cut from the 10-track album – is Nothing Left To Lose, accompanied by a video from director Charlie Di Placido (Kojey Radical, Jungle).

Written and produced by Ben Watt and Tracey Thorn over the spring-summer of 2021, Fuse is a modern take on the lustrous electronic soul the band first pioneered in the mid-90s. Thorn’s affecting and richly-textured voice is once again up front in Watt’s glimmering landscape of sub-bass, sharp beats, half-lit synths and empty space, and as before, the result is the sound of a band comfortable with being both sonically contemporary, yet agelessly themselves.

Speaking about the band’s re-emergence and new album, Tracey says:

‘Ironically the finished sound of the new album was the last thing on our mind when we started in March 2021. Of course, we were aware of the pressures of such a long-awaited comeback, so we tried to begin instead in a spirit of open-minded playfulness, uncertain of the direction, receptive to invention‘.

The pair recorded in secret at home and in a small riverside studio outside Bath with friend and engineer Bruno Ellingham. For the first two months, the artist name on the album files was simply TREN (Tracey and Ben), and early takes focussed on ambient sound montages and improvised spectral piano loops recorded by Ben on his iPhone at home during his enforced pandemic isolation – ideas which later blossomed into atmospheric tracks such as When You Mess Up and Interior Space.

Yet, as confidence grew, so did the pulse and rhythm of the album, culminating in the writing and programming of later songs, such as the new single Nothing Left To Loseand Caution To The Wind. Shot through with alternating hope, desperation and vivid flashbacks, the album’s lyrics – sometimes allusive, sometimes richly detailed, capture what it’s like to start again.

Ben explains: ‘It was exciting. A natural dynamism developed. We spoke in short-hand, and little looks, and co-wrote instinctively. It became more than the sum of our two selves. It just became Everything But The Girl on its own‘.

The duo’s renewed studio partnership also led to the new album title. ‘After so much time apart professionally, there was both a friction and a natural spark in the studio when we began’, says Tracey. ‘However much we underplayed it at the start, it was like a fuse had been lit. And it ended in a kind of coalescence, an emotional fusion. It felt very real and alive‘.

Everything But The Girl broke through on the UK indie scene in 1982 with a stark jazz-folk cover of Cole Porter’s Night and Day. They then released a string of UK gold albums throughout the 80s, experimenting with jazz, guitar pop, orchestral wall-of-sound and drum-machine soul. After Watt’s near-death experience from a rare auto-immune condition in 1992, the pair returned unbowed with the million-selling ardent folktronica of Amplified Heart in 1994. It includes their biggest hit, Missing, after New York DJ-producer Todd Terry’s remix unexpectedly made the leap from heavy club play to global radio success (Number 2 US Hot 100; Number 3 UK Top 40). The sparkling Walking Wounded – emotional songs brimming with ideas from the mid 90s electronic scene – followed in 1996 (Number 4 UK Album Chart). Spawning four UK Top 40 hits, the record became the band’s first platinum selling album. After their final show at the Montreux Jazz Festival in 2000, the pair chose to quit Everything But The Girl on a high.

The intervening years have of course been anything but empty. From 2007 Tracey released four solo albums, a movie soundtrack for Carol Morley’s The Falling, four non-fiction books and wrote extensively for The New Statesman. Ben became an international DJ and remixer, and ran his electronic label Buzzin’ Fly for ten years before returning to his singer-songwriter roots with a trilogy of solo albums from 2014-2020.

Nothing Left To Lose

Caution to the Wind

When You Mess Up

No One Knows We’re Dancing