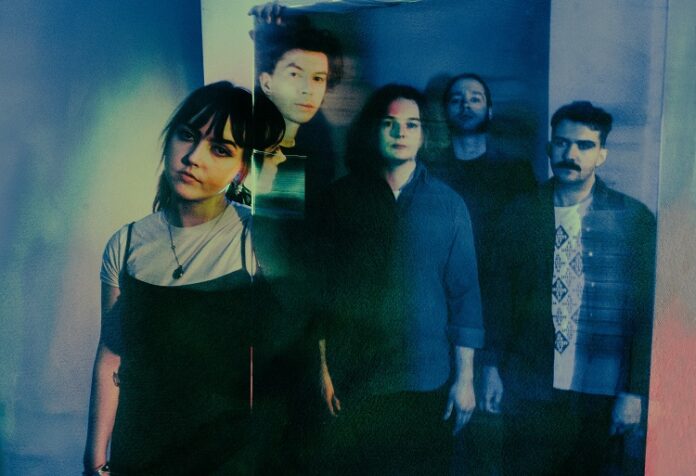 Dundalk, Ireland 5-piece JustMustard have shared a searing new track, “Mirrors,” taken from their forthcoming sophomore album ‘Heart Under‘ – out 27May via Partisan. “Mirrors” with its watery, swelling guitar chords showcases the softer, dreamier side of the record in contrast with the aggressive industrial tones found on previous single cut “Still.”

Guitarist and “Mirrors” co-vocalist DavidNoonan says of the single: “”Mirrors”” was one of the final songs to be written for Heart Under, the lyrics and music arrived together in what felt like one moment and we wanted to keep the feeling of one thought or moment constant throughout the song”.

‘Heart Under’ was primarily recorded at AtticaStudios in rural Donegal with additional recording and post-production then completed at home. The album was produced by the band and mixed by DavidWrench, whose previous collaborators include FrankOcean, Let’sEatGrandma, Jamiexx, FKA Twigs and beyond. The title, ‘HeartUnder’, comes from the lyric “the heart under its foot” from album track “Sore,” and throughout recording the band discussed the idea of wanting the listener to feel like they’re on a train going through a tunnel.

Just Mustard have previously shared other album highlights, “I Am You” and “Still.”

Just Mustard will tour throughout 2022. They are currently supporting Fontaines D.C. on their world tour – which will head to the US next week – and have announced a run of record store dates in the UK. The band sold out their first-ever NYC headline show last month at Brooklyn’s Union Pool, before heading to SXSW as one of the buzziest bands at the festival.

‘Heart Under’ follows Just Mustard’s 2018 debut – ‘Wednesday‘ – which earned acclaim at home and abroad – most notably capturing a Choice Music Prize nomination for Irish Album of the Year. Fader praised the band’s “intense and rich shoegaze-meets-noise sound,” NME called the album “a two-toned masterpiece,” the Irish Independent described it as “a swirling atmosphere-heavy thrill-ride,” and Stereogum said “Just Mustard are pushing the envelope when it comes to emotive sonics…simultaneously dismantling and progressive.” Their 2019 double A-side ‘Frank/October’ earned spotlights from KEXP as a ‘Song Of The Day’ and from BBCRadio1 as ‘Tune Of The Week’.

The band have performed at Primavera, EndOfTheRoad and were also handpicked by RobertSmith to support TheCure at Dublin’s Malahide Castle.