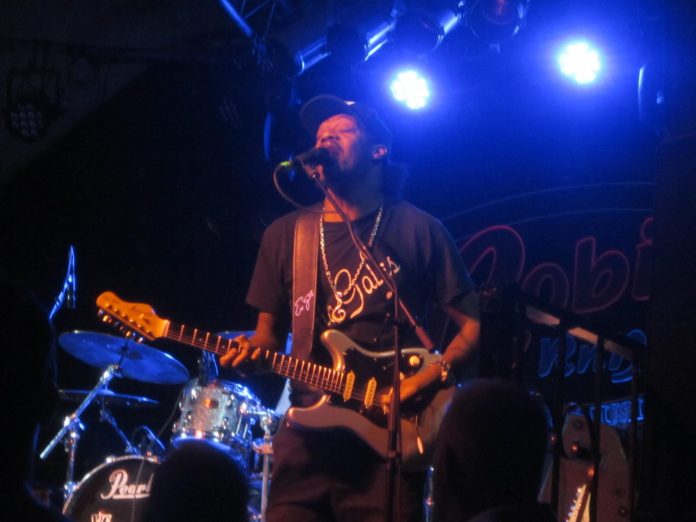 For some artists, if we are honest, being in a band is just an excuse to chase girls, rock n roll all night and party every day. Then there are others who do something a little more weighty, like get a political message out perhaps, but there’s a third group too.

Those who are so absolutely passionate about their art (an apt word) that they become their sound. For them, music doesn’t just matter it is the reason they are here.

Eric Gales belongs very much to the latter group.

For Gales, last July marked a turning point. It was then he kicked drink and drugs and re-dedicated himself to his music. Music that had been good enough to be lauded as the best in the world amongst his peers in the first place, now all of a sudden became even more focussed, sharper and – judging by the fruits of this labour, the new album “Middle Of The Road” – even better.

On his first UK tour (a fact he cheerfully notes as “bloody splendid” in his best Downton Abbey accent before the end) a big crowd has come to see if the rumours of technical wizardry allied to an almost evangelical zeal to play it were true.

It turns out they most certainly were.

A smiling, humble man, Gales first says he can’t believe the reception he’s getting, then after leading the crowd in a moments silence for the victims of the Manchester attack, he proves that he has all the ability in the world.

The song that most symbolises the new Gales if you will, is “Change In Me (The Rebirth)” and he admits to being emotional by the end. Another from the new record, his cover of “Boogie Man” is interpreted in a way you might not have seen coming, and heralds an hour or so more of some of the most intricate – yet passionately delivered – music you will come across.

Interesting as well, that one of the selections was “Don’t Fear The Reaper” done Eric style, while bass player Cody Ryder and drummer Nick Hayes get their run too.

The final member of the band is perhaps the most important, Eric’s wife LaDonna (“you have to clap her long and loud or else I’m in the van tonight”, he jokes) and her percussion is all over the mighty jam of “Swamp”, which at various points almost sees Gales make good on his promise to spontaneously combust.

The jamming keeps on coming with stop offs at various points along “Voodoo Chile (Slight Return)” and “Back In Black” amongst others, but the point isn’t what is played but how.

At the end of his set, right before the encore, Gales nearly breaks down when he lays bare his wish to make everyone in the world part of what he does and that he now hopes to inspire just one person to change their lives in the way he did.

A little earlier in the evening he’d said that now he was dedicating himself to music “whatever was coming was best to get out of my way”. Eric Gales blowing into any town is quite the proposition, and now he’s building up a head of steam you sense he’s only going to become even more of a force.