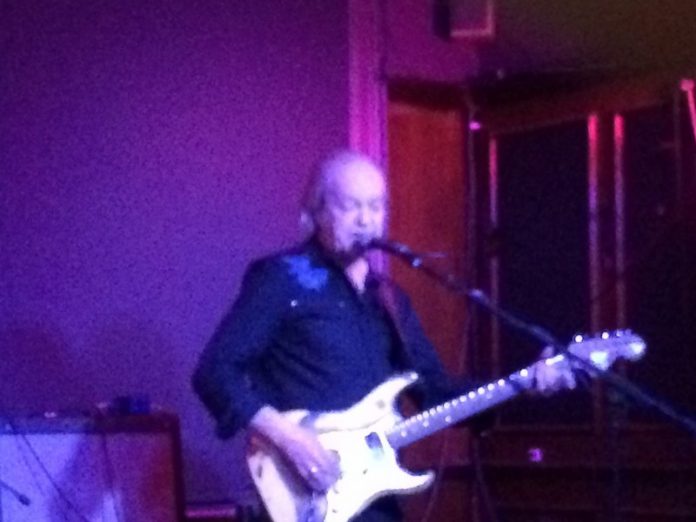 Eric returns from Exile and heads to Worcestershire

“Yeah well, we’ve got to play this if we want to leave alive”, grins Eric Bell. Even the man who famously gave Thin Lizzy their name – you may have heard of them, they are the greatest hard rock band to ever grace the planet –  has to play to the crowds, after all.

The song that follows is – as you may have guessed – “Whiskey In The Jar” and it’s superb guitar line somehow sounds exactly as it should when in the hands of the man who played it. Bell gives it a slightly different arrangement, but it’s unmistakably that incredible song.

That it’s one of just two Lizzy tunes to appear in this wonderful 90 minutes, makes clear a couple of things. Firstly, Eric Bell, although a founding member, had gone from the band by 1973 (returning a decade later for the last album) and secondly, he has plenty of other other songs to pick from.

Not least of which were released last week in the shape of the stunning “Exile” record. It’s perhaps a shame that only three of these (one of which is “Rip It Up” – a Little Richard cover) are showcased. That, though, is a minor quibble, given the quality of the jazzy “Gotta Say Bye Bye” and the heavier, grimy “Concrete Jungle”.

Elsewhere it’s a diet of either blues covers, such as the opening “Shake Your Moneymaker” and “Hoochie Coochie Man”, the occasional trawl through Bell’s back catalogue, with the magnificent “Irish Boy” being the pick or more likely, songs that Eric and the band just seem to like. The best of these, “Gloria” and Taste’s “Same Old Story” are joyously and lovingly delivered and the enjoyment of not just Bell, but drummer Romek Parol and bass man Dave Wintour is very evident throughout.

The trio play superbly, and Bell’s dexterity and ability on his battered old guitar is still rock solid, and it’s a fact that he still has a star quality, however much he might want to seek to shy away from the limelight.

As if to exemplify this, there’s no encore, but that other Lizzy song “The Rocker” closes things. “We’ll play it for one reason…..but you don’t know the reason!” Giggles Bell mischievously. And that sums him up. He could tell stories all night, instead he chooses to let that guitar talk for him.

At the end he simply puts his thumb up to the crowd and says: “Good luck”. That’s a given, we all had the good fortune to be here, after all.

Previous article
You Can Be Part Of Leprous New One
Next article
Featured Band: Testament