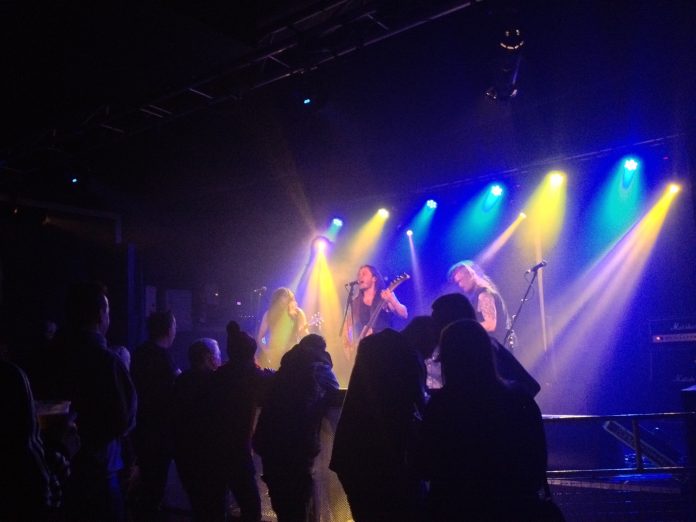 Paraletica headlined the very first MVM Presents night a few months ago. This means that even if they weren’t so superb they’d always have a special place around here. The fact they absolutely marvellous at what they do is possibly a bonus – but it’s still a rather pleasant one. Songs like “Inferno” and the heavier “Colossus see the five piece distill everything that’s ever been great about thrash and stick it into a handy package. Newer material like “Black Widow” has a harsher, perhaps more menacing quality, and the closing “Valhalla” might well take on the Vikings and win. Paraletica are one of those bands who if they weren’t onstage would be watching a band like them in the crowd. Only the non-Paraletica version wouldn’t be as good.

With their music as crushing and punishing as it is, Decimate are appropriately named. They are no less excellent than the previous outfit, but the intent is different to what went before. The local band appear to view hardcore thrash tinged metal as a starting point to release their inner demons and seemingly vast anger. Massive grooves and bigger breakdowns abound as the four piece clearly don’t intend to die wondering. Like a knuckle duster to the Adams Apple, Decimate get the job done with magnificent efficiency and with maximum impact. “Stand And Fight” is dedicated to Aston Villa and puts up a more stringent battle than they have for much of the last football season. Their set intends to to leave you bloodied and bruised and is nothing more than an object lesson in brilliantly focussed aggression.

As openings go, you have to give Trivax credit, they do drama rather well. A lengthy intro sees feedback, fists in the air and everything becoming rather solemn. The Birmingham based band are in corpse paint somewhere between King Diamond and Kiss and when the they do begin the theatrics give way to a chaotic brand of something akin to a black metal and thrash mash up. “This is One War” screams singer Shayan and you sense that behind the facade he means every last word and would fight with all he has. The riffs – and there are plenty –  as well as the ability to pound like a Lump Hammer have a grandiose quality and this unholy quartet provide an interesting counterbalance to the other acts here.

George Harrison’s “Set On You” plays them onstage and whilst this is a seemingly knockabout choice, it might actually have more prescience than you first think. After all, it does say in its chorus that it’s “gonna take patience and time to do it right” and there is a real sense with Eradikator that they’ve paid their dues long enough thanks, and they need to break through. Or as singer Patrick puts it rather more succinctly: “we ain’t here to waste no fucking time…”

He’s not kidding either as songs come and go at breakneck speed. Some, from their as-yet-unreleased second record, others from that brilliant debut they stuck out a couple of years ago. “Man Behind The Mask” is visceral, and there’s a new confidence here about all concerned, even older songs like “Judgement Before The Thrown” sound reborn.

The title track of that soon to be out second album “Edge Of Humanity” grooves and thumps in equal measure and augers well for the record proper, while some of the other new material seems, on this first hearing to add a touch more groove to the thrash mix.

Things end with a riotous cover and Van Halen’s “Panama” hasn’t sounded this fresh since ….oooohhh 1984. There’s an encore too and as usual Eradikator get bonus points for airing one by the greatest Hard Rock band of all time – and they get further credit for eschewing one of Thin Lizzy’s most well known moments in favour of “Hollywood (Down On Your Luck).”

Which brings us back to the start. Because maybe that tale of making it big after hard times is – like the George Harrison song which opened the set 50 minutes preciously – Eradikator reminding themselves of that imperceptible “it” that takes to to succeed. Whatever “it” is, believe us, Eradikator have it. Lots of it.